Guy Massey In The Studio

Guy Massey In The Studio

After working as staff engineer for the legendary Abbey Road Studios in London, where he recorded albums by the likes of Radiohead, The Manic Street Preachers and Oasis, Guy Massey went freelance, eventually winning the MPG’s prestigious Recording Engineer of the Year award in 2010 and Mix Engineer Of The Year in 2015. He introduces Polymath Perspective to his mixing and overdub studio and talks us through his setup. 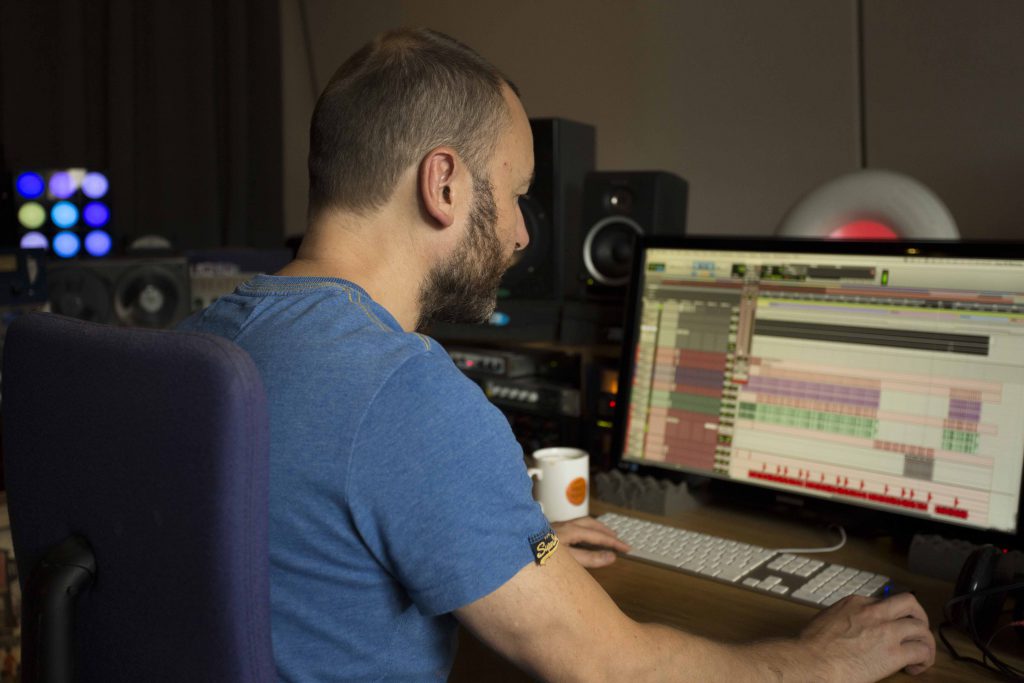 Palm Recordings is a North London studio complex where for the last couple of years Guy Massey has rented a room for mixing and recording overdubs. For Guy, the premises is in the perfect location: not only is it a cycle ride from his home, but it also has a wonderful view of London’s iconic Alexandra Palace and is very close to Konk Studios (owned by Ray Davies of the Kinks), where Guy often goes to record!

Ion Metsovitis, the founder of Palm Recordings, originally used the room as his personal studio, so by the time Guy took it over it was already soundproofed and acoustically treated.

“Now I’m in here all the time,” explains Guy. “I mostly use it for mixing and editing stuff that I’ve recorded or produced. So I’ll go to in a proper studio like Konk or Snap to record drums and developmental stuff and come back here to do all the overdubs and vocals. I’ve been here two and a half years and mixed some good albums.”

At the heart of Guy’s studio is an Apple Mac running Avid Pro Tools 11 HD, although he is planning to move to version 12 soon. In terms of plug-ins, Guy uses UAD and Waves Mercury bundles almost exclusively, and admits that he couldn’t live without UAD, as it has  changed the way he works.

At once stage he was doing all of his mixing ‘in-the-box’, using no hardware processing at all, but recently began to feel that something was missing. Eventually he bought a Roger Mayer 456 Analogue Tape Emulator, which he now says he uses on everything, and that experience convinced him to start incorporating hardware back into his setup.

“I’ve got back into the analogue again because it sounds better to me,” admits Guy. “Having a desk would be ideal but the turnaround times increase and recall is compromised. It was fine when you could have three days for a mix and a day for recall but you don’t have that luxury anymore. Nice mic amps, compression and EQ is all you need. The computer does it all after that.”

Most of the recording Guy has done in the studio so far has been guitar and vocal overdubs. Guitarist are usually invited to play in the control room but the amps are placed in the isolation booth next door.

“If I’m doing guitars I’ll have three inputs,” explains Guy. “I’ll take a DI straight out of the guitar, because I can process that much easier if it hasn’t got all the effects and distortion on it. Then I take a split of the signal using Little Labs Red Eye and send it into my Fender Twin and Audio Kitchen Little Chopper amps that are in the booth. I’ll have Neumann U87s on those, or possibly a U87 and ElectroVoice RE20, and I’ll make sure the phase is good.

“The guitarist will be in the control room in front of the monitors, so we shut the doors, turn the level up and off they go. They can get feedback from the monitors if they need to.”

Guy also like to record vocalists in the control room rather than the booth, simply because he can communicate with them a lot easier if they are in the same room as him. “I usually have the singer in the corner facing into the room singing into a U87 or RE20,” says Guy. “I generally use headphones for vocals but sometimes I’ll just put up an RE20 and have the speakers on low if it’s quieter stuff. There’s bit of spill but generally it doesn’t really matter.

“The vocal booth it’s very dead sounding so you can get really close vocal sounds. The stuff I’ve been doing recently is quite dense, so room ambience is not important.

“When I did the last The Duckworth Lewis Method record, Sticky Wickets, we did some vocals here. Most of it was recorded in Ireland and Neil Hannon did some extra bits at his place, but during the mix Daniel Radcliff did his voiceover here.”

“The only thing you can’t really do here is drums. You could clear everything out of the booth and record a little kit in there with a very close sound, which is something I’d like to investigate, but I prefer recording drums in a proper room with a big desk. I was in Konk a few weeks ago with a young band from Milton Keynes and we did the drums and the bass and the majority of the guitars for three songs in a day. Then they came here and did guitar overdubs and all the vocals in two days and I took a day to mix each track. So we did a four-track EP in a little over a week.” 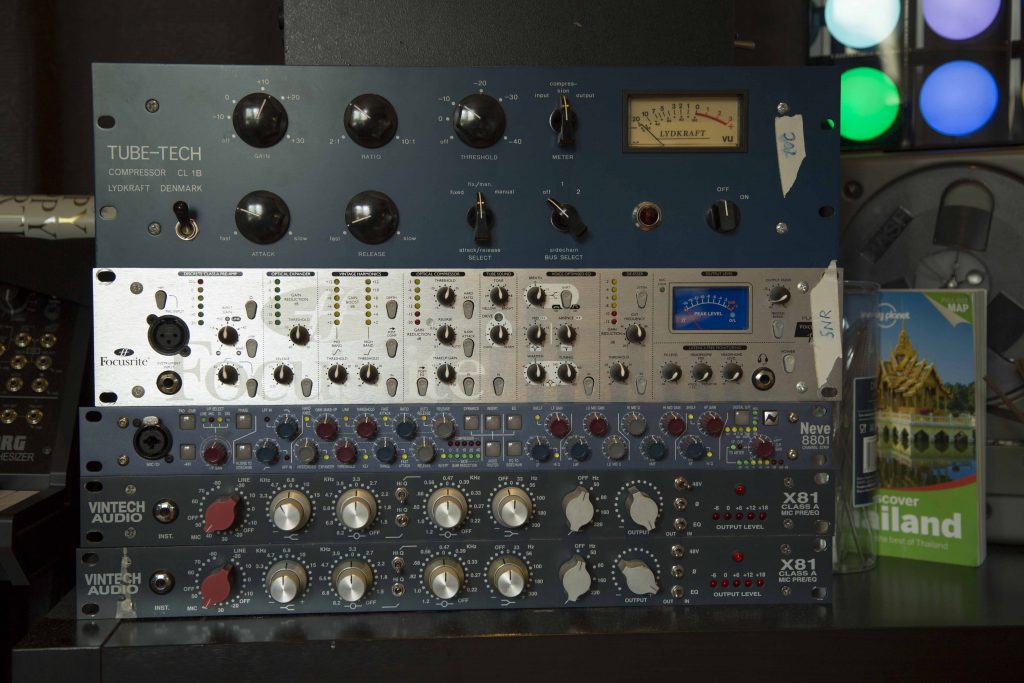 Many of Guy’s favourite hardware processors are used for both recording and on the master mix bus, auxiliary busses and channel inserts. When he’s recording guitars and vocals, Guy usually uses the Focusrite Red 1 500 Series mic amps and feeds them into the Roger Meyer 456, or sometimes he just plugs straight into the Roger Meyer. When compression is required, Guy inserts his newly-purchased Dangerous Music Compressor, or his Smart Research C2, and for EQ he favours a pair of Kush Audio 500 Series Electra EQs.

“At the moment,” explains Guy, “the C2, Dangerous and Roger Mayer are on the mix bus but the C2 isn’t doing anything, it’s just a gain makeup stage because the Roger Mayer has a low output. The Dangerous Compressor is just tickling at 1dB, or 1.5dB maximum. A lot of people would use it for mastering and it does seem to be very transparent, but it sounds good if you push it too.

“If I was recording drums I would have it on the overheads. When you have a Fairchild on overheads it sound buttery and glues everything together, and you can set the Dangerous to do a similar thing.”

Slightly hidden behind his computer screen are Focusrite ISA430 MKI and MKII channel strips, which Guy says he uses for lots of different jobs, but at the time of our interview they were simply providing VU metering!

“My hardware insert for mixing goes into the ISAs and I’ve got them setup so they never peak above 0VU,” he insists. “So for the mix I’m doing today, inserts three and four go into the ISAs, then into the Kush Audio Electra EQ, then into the Dangerous, and then into the Roger Meyer 456. I don’t touch the Mayer’s controls for mixing, but if I want to saturate a little bit more I start pushing the ISAs above 0VU and the Mayer takes over and starts saturating more. It’s all set at unity gain, so I’ll send a tone out and make sure that the gain out of the Dangerous isn’t too high before it hits the Roger Meyer. That way I know that I am not getting any extra saturation. Then the Meyer goes into the Smart Research C2, and that feeds back to the insert. The Kush Audio EQs have a really extended high end and I’ve added about 1.5dB boost at 20kHz and some real low end at 50Hz.

“Sometimes I’ll do a bounce through the insert and push the master fader to saturate drums and stuff. But you have to move stuff back because the system delay is quite big.”

Guy says that he used to work on his mix first and then apply processing to his master bus but for the last year he has been mixing with the processors in-circuit from the start. “Mixing into compression and EQ frees you up because you know how hard to hit things,” explains Guy. “In this day and age, when a quick turnaround is essential, having a method is good. I still don’t use templates; I set each track up from scratch. I like the process of doing that.

“For a lot of mixes I’m using all of that analogue gear on the mix, but when there is more electronic stuff it softens it a little bit and sometimes you don’t want that, so I’ll take it out, but from the input to the output there isn’t any volume jumps so it’s easy to drop the insert in and out.” 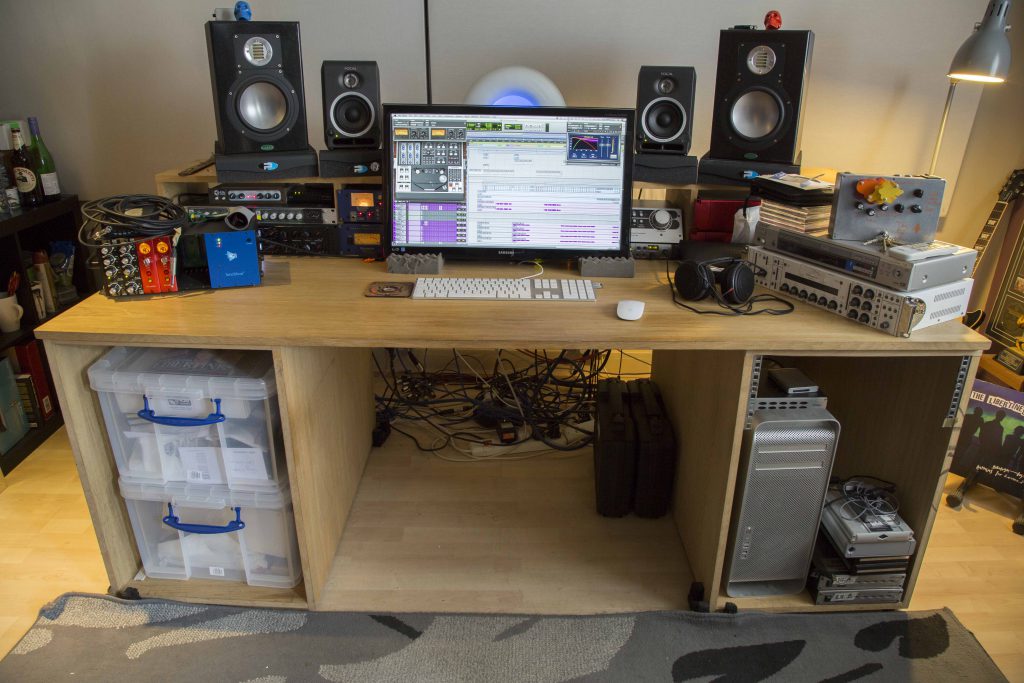 “I always use the ATR-102 with a bit of EQ going into it,” says Guy. “I set it so the VUs never peak above zero, otherwise it saturates too much. Sometimes I take the ATR out if it squashes stuff too much, but I like the depth and body it brings. Then I’ve got a Maximiser which I automate, so in the verse I haven’t got a huge amount of it, but in the chorus I push it up. If you push it a lot it becomes a limiter, but I use it quite subtly. It makes things leap out almost like a loudness button.

“I’ve got quite a bit on the mix bus but the FATSO might be too much so I might turn it off when I send it to mastering.

“I’ve been using the Slate Digital FGX for making listening copies and it’s brilliant. The Waves L3 Maximiser can be quite aggressive but this doesn’t seem to be. The trigger is especially good for drum replacement if you need to do any of that.

“I’ll send stuff to auxiliary busses to process too, so if there are three bass mics, for example, I’ll often send them all down a mono or stereo aux and process them together. I also process individual channels. For example, on this mix the drum sound wasn’t doing it for me so I took a split of the ambient mic and really compressed and distorted it.”

Scattered around the control room are a number of other hardware processors which Guy seems to like a lot. “The Vintech X81 mic amps are Neve clones and they are brilliant,” he says, “and the Tubetec CL 1B compressor is great on vocals. I also use the Focusrite Liquid Channel quite a bit on vocals for that approximation of a Fairchild. This Audio Kitchen Big Trees is something I use all the time. It’s an amp in a box so you can attach it to a cabinet or use it as a pedal and I sometimes send stuff to it as an insert for grit. It has a really creamy distortion and goes from full-on growl to beautifully saturated sounds.”

“I’ve also got Focusrite Rednet units for when I eventually get a summing amp. At the moment my HD Protools is only eight outs, but if I turn these on I’ve got 24 ins and outs so I’ll feed those into a summing mixer and sums those to stereo in the analogue domain, which should gives width height and depth to mixes.”

Guy doesn’t like using Yamaha NS10s for mixing, finding them too mid-range and fatiguing. His monitors of choice are currently the Unity Audio The Rocks, which he describes as being really detailed and never fatiguing. Next to them are a pair of Focal CMS 40s that Guy finds useful for balancing vocals, and he also uses an iPod docking speaker for reference. 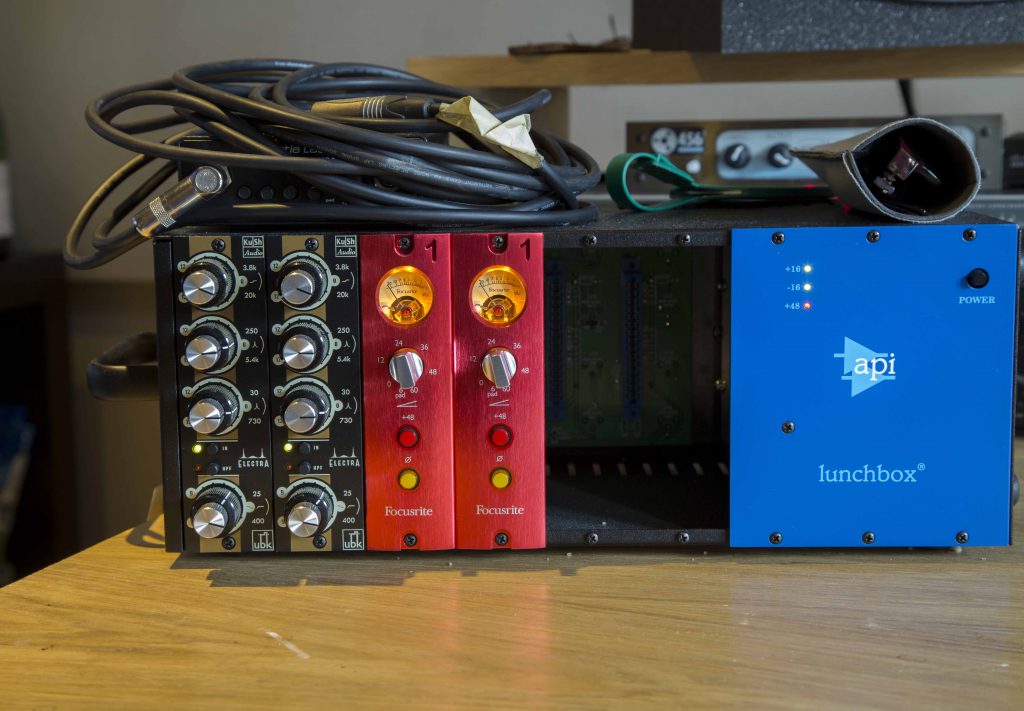 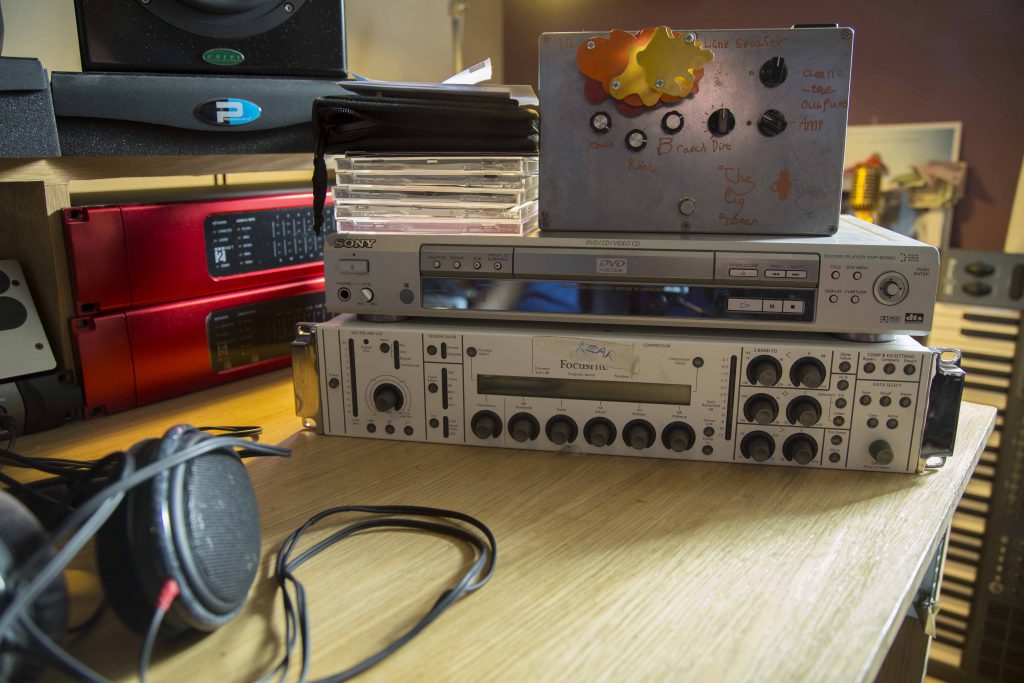 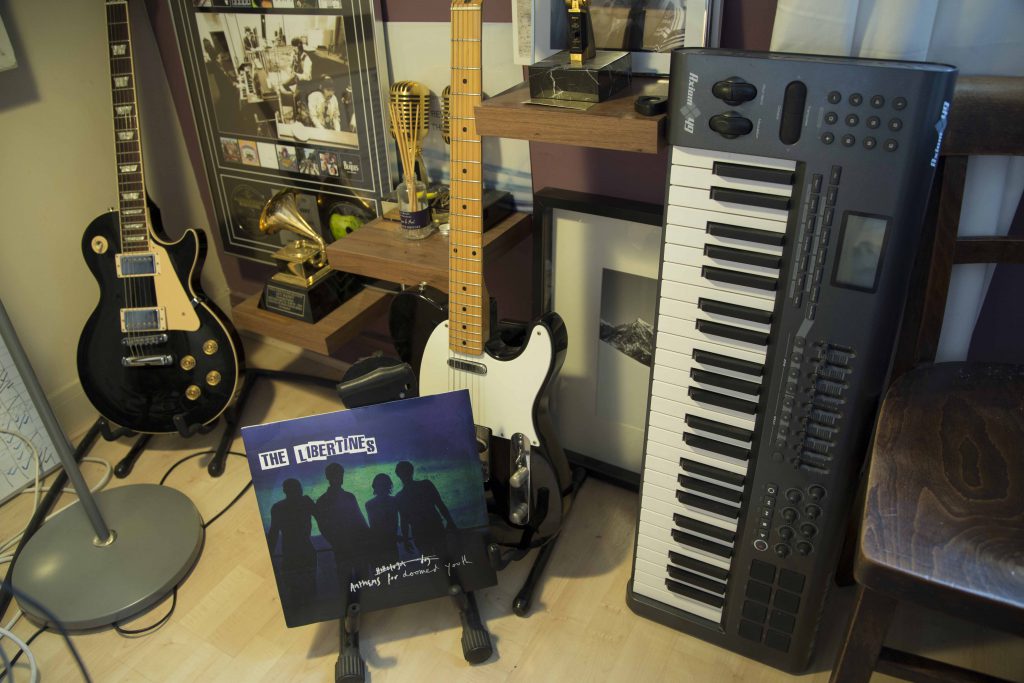 Guy talks us through his drum mic setup at Air Studios, explaining why he has used certain mics and particular configurations, here.