In Part 2 Cenzo talked about the equipment in his mix room and explained how he uses it. In Part 3 he goes on to describe the recording setup, how the live, control and isolation booth have been designed, and give us an insight into his vision of the future for Decoy Studios. 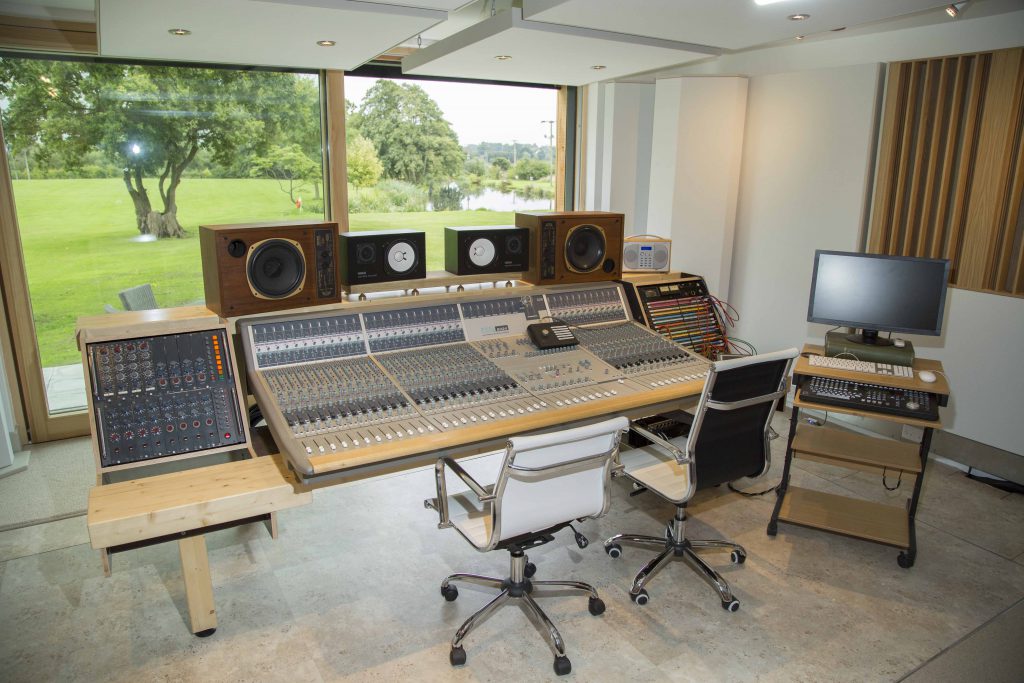 Although Cenzo’s mix studio is right next door to the rest of the rooms, in terms of equipment they are entirely separate. For recording there is a 64-input Pro Tools HD3 system, with an iZ Radar II acting as a front end, and the channels come up on an Audient ASP 8024 36-input analogue console with 20 channels of Class A Neve 1073 and 1066 microphone amplifiers.

“The Audient has 12 auxiliary sends and three speaker circuits,” says Cenzo. “We’ve got some Tannoys, which we love for tracking, some PMCs, and some Yamaha NS10s.

“We’ve also got an old iZ Radar 2 which Stephen Street and I used to use. Their sound is exceptional. iZ are fanatical about their clock and their converters and the only down side is iZ equipment is expensive. We used to record on Radar, then transfer to Pro Tools to edit, then put it back. We’ve refined the process now so we record into Pro Tools via the front end of Radar. So the signal comes from the microphone to the preamp, compressor, EQ, or whatever you want to use, into the Radar input, and then digitally out of the Radar into Pro Tools. So nothing is recorded on Radar.

“The main instruments we have here includes my 1967 Ludwig drum kit with Zildjian K Custom Session cymbals designed by Steve Gadd. We have a 1970s Fender Rhodes, an Ampeg B15 bass amp, which is beautiful, a Fender Twin, some old Marshall heads, a Marshall Bluesbreaker and Fender Champ. Some newer stuff we have include Audio Kitchen amplifiers and a Palmer 50 Watt amplifier which are amazing and I’m a big Hiwatt fan too.

“We have a mixture of old 70s microphones. My favourites are Neumann U47 FET mics, and I have four of those. I’ve also got a U67 valve, which I love, and I like ribbon mics a lot. Coles ball and biscuit mics are hardwired in the room, and then we use the normal Coles 4038s for overheads. I have Shure SM57s in abundance, and I’ve also got a very old AKG414. I’m not a fan of 414s, but this is one of the first and sounds incredible. I don’t know why. And I have a Telefunken ELAM 251 copy made by Soundelux, called the ELUX 251, which is amazing. We bought it for Bernard Sumner’s voice when we recorded New Order and we’ve had it ever since.”

“Plus we have the usual array of cheaper mics, including some SEs which are really good, Sennheiser 421s and Neumann KM84s which are also one of my favourite Neumanns. At Trident and Townhouse we used to have buckets full of these microphones, and if we wanted a pair two we’d just pick two up.” 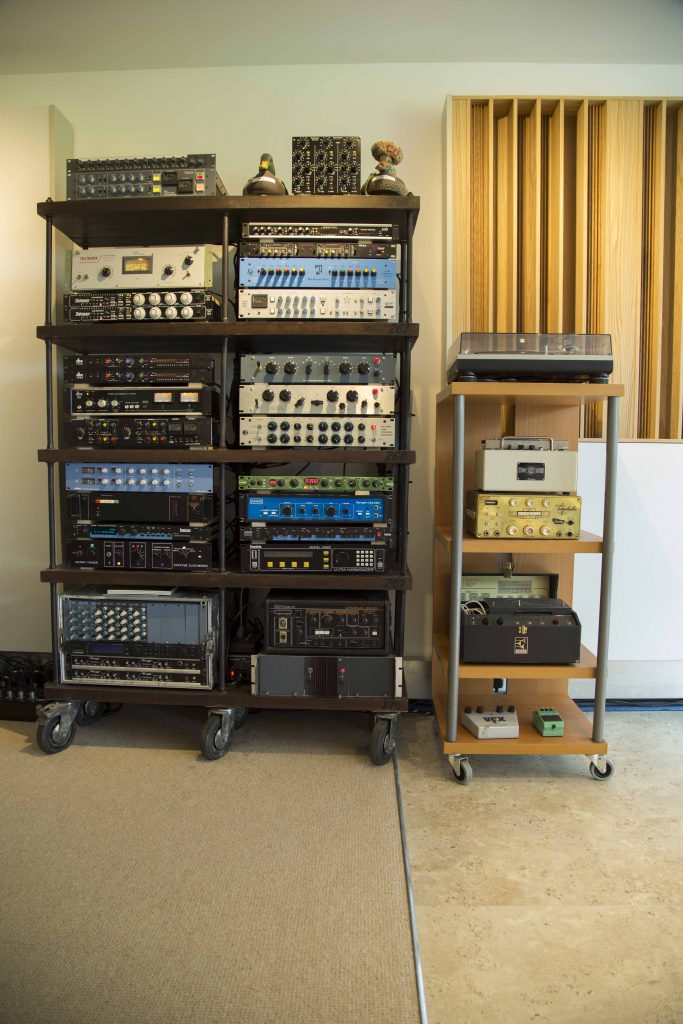 The main rack in the control room

Perhaps the most striking characteristic of the live room is the huge circular log diffuser that dominates the back wall, and reflects the rural nature of the studio’s surroundings. Although the mass of logs looks like decoration, it has been carefully designed to function as a sound diffuser, as Cenzo explains. “David Bell, who helped us design these rooms, worked out the varying lengths of logs that I needed for it to work. We have four lengths but the widths are completely random. The difficulty was finding a company that sold kiln-dried logs, because normal logs would shrink and fall off. They we had the conundrum of how to fix them to the wall, but our carpenter, Roy, who built most of the studio, found a way of keeping them up using different types of glues and aluminium brackets. The rest of the wall is rockwool with stretch fabric over it, so it is soft and will absorb.

“The library room is quite dead. That has a similar principle to the live room but the back wall is a bookcase diffuser with varying widths and lengths of books, which works beautifully.

“We used to rent a house called St Catherine’s Court in Bath belonging to the actress Jane Seymour, where OK Computer was recorded. We set the control room up in the library and the band were in the ball room, but everybody loved being in the library. It sounded fantastic, it was comfortable, and a really nice environment.

That gave me inspiration for this studio. I wanted to be in a environment where you don’t have to have the air conditioning on, you can just have the windows open. Sometimes you are going to turn it up or you have a band playing and you’ll want to shut the door, but most of the time you don’t need to.

“But with these diffusers I tried to find things that I liked and remembered and the book case works really well. Also a producer called Jimmy Hogarth who works in London, has a bookcase at the back of his control room and I remember loving it when I saw that, and  that reinforced my feeling for doing that when I eventually managed to get my own room.

“It’s big enough to record a drum kit in there and I think it would be great for a 70s sounding kit. I remember going to studios which sound great when you wanted it to sound chunky and dead, but when you wanted a bit of life and you needed some space or some early reflections. You don’t want to have to fabricate that. Sometimes you can do it with sheets of corrugated iron or plywood. When we recorded a Graham Coxon album in Mayfair’s SSL room, which was a very good room but very dead, we bought sheets of plywood and put them up around the guitars and drums to try and get some life. It was all carpeted so we sat the drum kit on two sheets of ply which also helped give it a bit of life.

“But it is easier to deaden a room than it is to make it more acoustically pleasing with reflections, so with the live room we are starting with it being live, then we are taming it with rugs and screens.”

“I’m also building an absorbent cloud that will hang above the drum kit and we will be able to raise and lower it with an electric motor to vary the acoustic of the drums, so if we need it deader, we will bring it down. It’s about four by two-and-a-half meters.

Again, we are experimenting. There is a really good open cell foam I’ve been using called melamine foam, which is very light. That’s what the sofas are full of and they work really well whereas the walls are mainly rockwool, so we are going to be experimenting with that, and if that works we may even build another cloud for the room as well. It’s not expensive if you have a carpenter who is good.

“We’re also making some screens. I wanted to get some of the old BBC type screens, but the problem with those is they are so big you can’t move so they always sit in your room and affect the acoustics. It always annoyed me that they were always in the room at Olympic and Townhouse.” 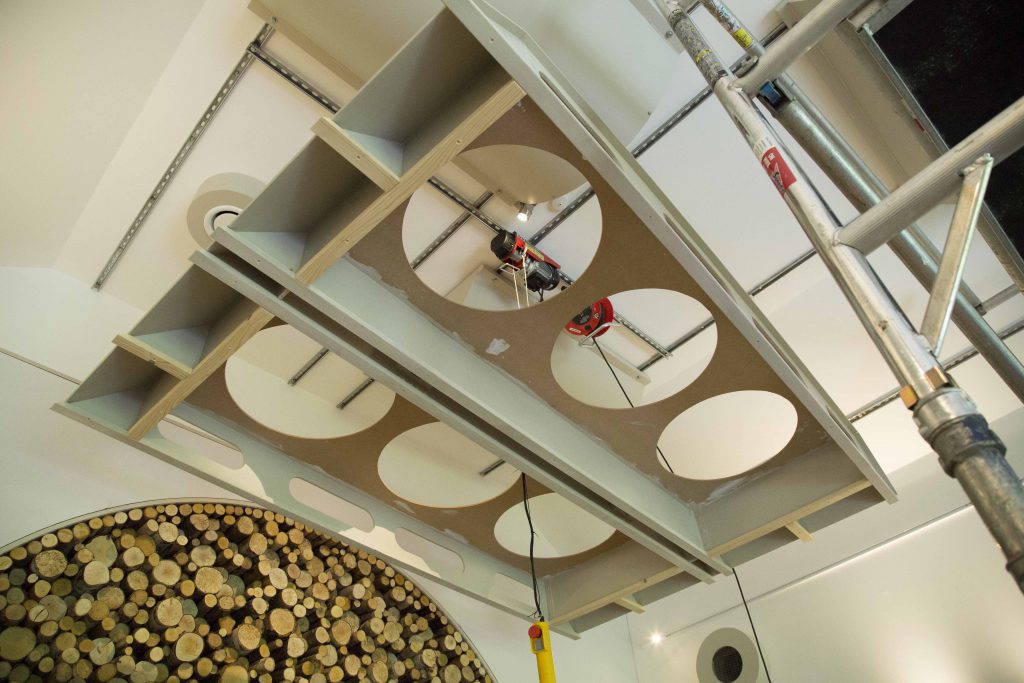 Construction of the absorbent cloud that now hangs above the drum kit, named the drumbrella

Building For The future

Cenzo’s experiences of recording at Jane Seymour’s St Catherine’s Court House, rather than in a dedicated studio, not only inspired his choice of acoustic treatment, it also gave him some ideas on how to develop Decoy in the future.

“Working at St Catherine’s Court was a great idea and it worked well. Since then I’ve recorded in a house here on the beach and it’s something I am keen to continue doing. The idea I’ve had is if people want to come here to record drums or whatever, we’ll rent them a local holiday let, and they can start the project in their accommodation. We will set up a Pro Tools system and give them an engineer so they’ll have somebody there who can set the equipment up and maintain it. We have everything in flight cases so it’s very simple to do. And it is so easy to can run Cat 5 cables under doors for vocal booths.

“They can use any of our mics, headphones or instruments, and carry on recording in the house, with our engineer, which will be more cost effective than being here. If you haven’t got a cable or headphone or whatever, we’ll be a stone’s throw away, where we have more stuff than we know what to do with, and renting a piano is really easy. Then they can and then come here at the end and mix. So the idea is to give people a choice of how to record cost effectively. It’s not going to cost a thousands a day like it used to. I think people will quite enjoy doing that.

According to Cenzo, the picturesque area around Woodbridge is home to a great number of creative individuals, but perhaps the most famous of it alumni, at least from a musical perspective, is Brian Eno, who was born in the town. Aware of Eno’s connection with Woodbridge, and that he had a studio called Wilderness Studio in the town, many years ago Cenzo approached him to ask for a job, hoping to be able to live and work in the same area.

“I asked him for a job once when he had a house here and I was a young lad,” Cenzo fondly recalls. “I used to work for Trident Studios and our chief engineer at Trident was Flood, who has worked extensively with Brian. I phoned Flood and said, ‘I want to ask Brian Eno if he’s got a job,’ and Flood said, ‘Well, you can try, why not!’

So he made the introduction and I drove up to his house, and said, ‘Hello, I’m Cenzo and I’d like a job.’ And he explained to me he didn’t really have a job! Then 10 years later I met him in Dublin when I went to mix some U2 songs and ended up sitting having dinner with him and U2 in their kitchen, which was quite daunting. And Brian remembered me turning up at his house, knocking on his door and saying ‘Give us a job!’

“The U2 album we were working on was ‘All That You Can’t Leave Behind’. Brian’s original idea was to stick to 24-track, record the band and then just mix it to make it sound good. He wanted to make them work and not to embellish it too much, because the albums before that had been extensively worked on. It didn’t work out like that in the end but it was a much more back-to-basics album, and that’s what he wanted.” 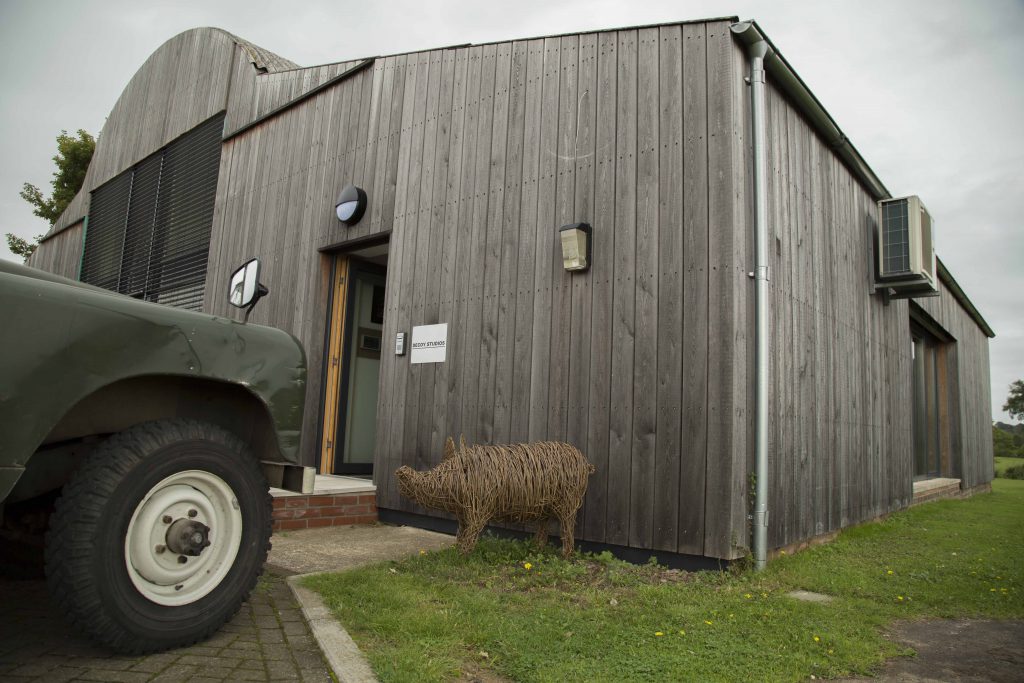 Our interview with Stephen Street can be found here: Part 1

Our interviews with Brian Eno can be found here: The Philosophy of Surrender
And here: Brian Eno and Karl Hyde Recording Someday World