Award winning mixing engineer, Cenzo Townshend, explains why he has left London behind and set up his new studio complex, Decoy Studios, in the rural countryside of Suffolk.

London is where every British record producer has to work at some stage in their career if they are to make it to the top, for it is home to the UK’s major record labels, publishers and management companies, as well as many of the biggest and best commercial recording studios. Cenzo Townshend has served his time in London and is, without doubt, one of the most sought-after mix engineers working today, mixing albums for artists such as the Kaiser Chiefs, U2, Snow Patrol, Florence and the Machine, Friendly Fires, Bloc Party, Franz Ferdinand, Jamie Cullum, Graham Coxon, Athlete and many, many more. Until recently Cenzo’s mix room was in the basement of London’s Metropolis Studios, but in 2011 he relocated to a converted barn on the outskirts of Woodbridge, in rural Suffolk, and named it Decoy Studio. The view from his windows is that of a lake and beyond it is nothing much more than fields and trees. Not far over the horizon there is Sutton Hoo, the famous Anglo-Saxon burial site, and a little further still is the sea. A far cry from the hustle and bustle of London!

The appeal of working in such surrounding is obvious, but leaving London was still a brave move. Cenzo explains his reasons for trading in the big city for the peaceful countryside.

“I’ve actually lived in Woodbridge since I was a teenager apart from when I moved away to work in places like Liverpool and Dublin, and for 20 odd years I’d worked in London five days a week and travelled back here at weekends.

“I used to share a room with Stephen Street in Olympic Studios and then spent three or four years in Studio 3, which was a mix room, mixing all the time. Prior to that I’d worked with Stephen doing whole projects. I’d usually set Stephen up to record when he’d start work with a new band, then I’d leave and carry on with my mix projects. Then at the end I’d return and mix Stephen’s production.

“When Olympic closed I had to move to Metropolis very quickly. I was in studio B for almost three years, which is an SSL room in the basement. But it didn’t really give me the flexibility to do the projects I wanted to because a lot of clients couldn’t afford the £800 or £900 a day for the studio on top of my fee. As much as I really enjoyed being there I was looking for a better solution.

“I wanted to put my roots down and build a studio somewhere and I didn’t feel like doing it in London where the prices were prohibitive. I’d never have anything on this scale in London.

“Then I found a warehouse overlooking the river in Woodbridge which I took a lease on, and my architect had plans drawn and engaged a builder to price it, but the builder said ‘I think I’ve got a premises you’d much prefer,’ which is not something I wanted to hear a year down the line! But we came here and all agreed that this was the place because of the views of the lake and the solitude and the quietness, and we are four minutes from Woodbridge, which has restaurants, hotels, bars and pubs.

“I moved into my mix room with the help of studio designer David Bell who organised the build for the mix room and all the acoustics, and that enabled me to mix the The Maccabees Given to the Wild album. I literally finished work in Metropolis on a Thursday and on Monday we were starting the album, having temporarily installed my SSL, all my outboard and some acoustic treatment.

“The mix room takes up exactly a third of the space in the barn, but now we’ve converted the other two thirds into recording facilities with an Audient console in the new control room, married with my Neve and Telefunken mic amps and a lot of old outboard gear, a large live room with vintage drum kits, guitar amps and a Rhodes piano, and an isolation booth. It’s taken just under a year to build.

“The idea is that if a band want me to mix their album, they can come here and do overdubs and finish it if they need to. Often I’m mixing an album and the band haven’t quite finished the backing vocals or are doing the odd guitar and sending me things, and that’s a disjointed process. So we can get it done far more cost effectively if they come here and do B sides and finish the album while I’m mixing in the other room.

“Also if people want to record here from beginning to end that’s great, but primarily it’s set up for facilitating bands that I am working with.

“We are only limited by the size of the live room, which is quite a good size. It would be fine for a quartet or a small choir. I don’t do an awful lot of orchestral recording, but whenever somebody wants to do strings on an album I’m involved in I always suggest that we get an arranger and do it somewhere like Abbey Road. I can usually convince clients to go to Abbey Road because they want the experience of going there.”

“Occasionally I’ll work somewhere else. We did a stint in LA a little while back and sometimes I’ll have to go to London to do something, but 97 percent of what I do is here. Labels are very happy to come here because it is far cheaper than renting a big room in London. I still use my large-format consoles for a lot of work, so I need that kind of facility.

“Artist are quite happy to come here too. If they get on the train at Liverpool Street they are here within an hour and 10 minutes so it is no hardship for them to visit.

“Label and management people who come here sit outside and are lost. They listen to the silence and are baffled by it. It takes them a good half a day to relax and then they love it. Suffolk is a beautiful and very comfortable place to be. It’s relaxed and quite arty.” 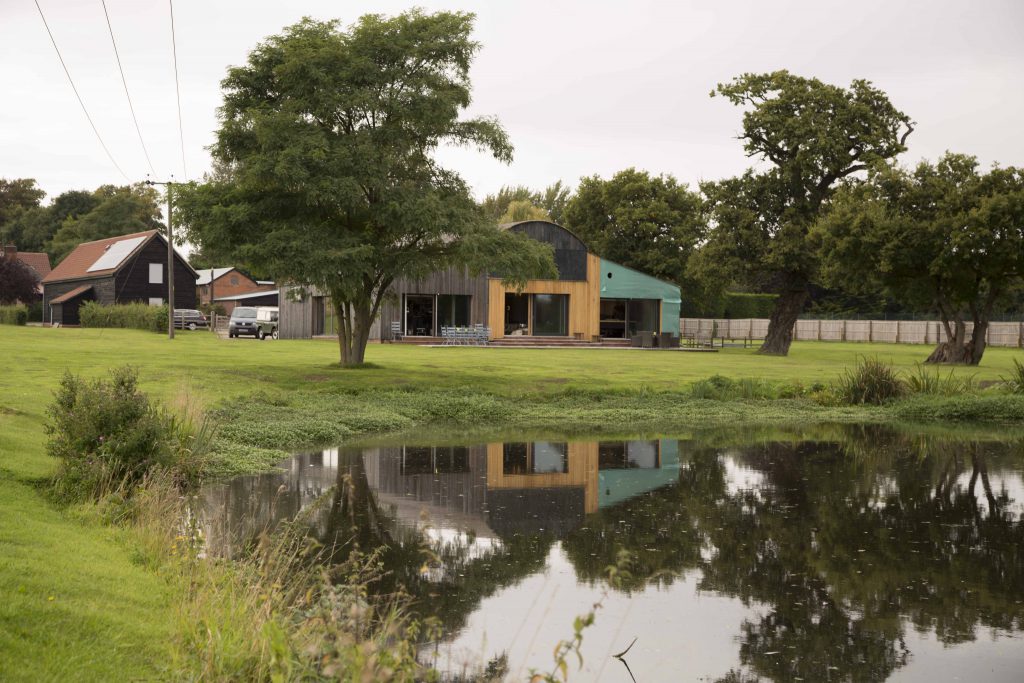 Decoy as seen from the lake

When Cenzo first moved into the barn, most of the interior space was empty, however, one section of it had already been separated off and insulated ready for leasing to a business. It wasn’t specifically designed to function as a mix room or recording studio but, as it turned out, the environmentally-friendly building techniques used in its construction meant that studio designer David Bell was able to adapt the room without altering its structure.

“David’s brief was basically to make this oblong box work without moving walls,” explains Cenzo. “The section that was already done, but Paul Cobbold, who owns the land and the fabric of the building, is a very ecologically-minded builder and so the walls are insulated to the nth degree and it was the perfect basis for what we wanted. It was soundproofed in that there is a room within a room with insulation around it. Construction methods work like that now just purely for thermal insulation. So although it is not 100 percent soundproofed, it’s fine for mixing.”

Decoy’s large live room, which occupies the centre of the barn, the new control room based around an Audient ASP8024 console, and a large isolation booth styled to look like a reading library, were all built at the same time, filling the space next to Cenzo’s mix room. The library booth is the only room that doesn’t have large windows looking directly out over the lake, but its window still lets in natural light filtering through from the control room. Cenzo explains the concept he had for the rest of the studio.

“It’s all about the glass walls overlooking the lake. I knew we could make that work because it worked brilliantly in my mix room. I wanted it to be a pleasant and relaxing place for people to work. And we had to do it fairly cost effectively because in this game it is all about keeping your overheads low. So we’ve tried to keep it affordable.”

“The live room is now the hub of the building. At one end of it is a chill-out area, the other has the drum kit and we can move any of it around to suit what we want to do, but I want it to be the place where people spend most of their time.

“A lot of the donkey work will be done in what I call the library, which is a vey big isolated booth. Most of the guitars, vocals and overdubs will probably be done in there leaving the live room empty most of the time, which is generally what happens in studios.

“Finding the right cables helps enormously. We’ve spent an awful lot of time and energy researching cables, testing them with guitars and speakers and instruments to find the ones we liked. We’ve found that Cat 5 works extraordinarily well for transferring sound from a guitar to an amplifier. In fact it’s too good, and you have to put a guitar lead at one end of it.

“We’ve kept everything as short as possible so the longest cable run is probably 10 meters. So if I was to set up a band in there they would all be in the live room but if they want separation the amps would be in the booth.”

“We’re also building speaker enclosures. I’ve got some big touring trunks which we are going to insulate and put some speakers in and experiment with what sounds good for bass and guitar. We’ve got people here who are really keen to do stuff like that.”

“For these rooms we went a stage further than the mix room and floated them on concrete rafts that sit on rubber blocks. The loads were worked out by a company called Christie And Grey who build the concrete rafts. They put these tin trays down on the rubber blocks, add steel reinforcement then they pour about 9 inches of concrete. It usually takes a day but the concrete takes a long time to go off.

“You’ve got to be careful not to bridge the gap between the inner room and outer room, because it is very easy to do, but now most builders are aware of issues like thermal bridging, especially with windows. Insulation is much more common place too, so us filling the walls with tons and tons of rockwool isn’t such a dark art.” 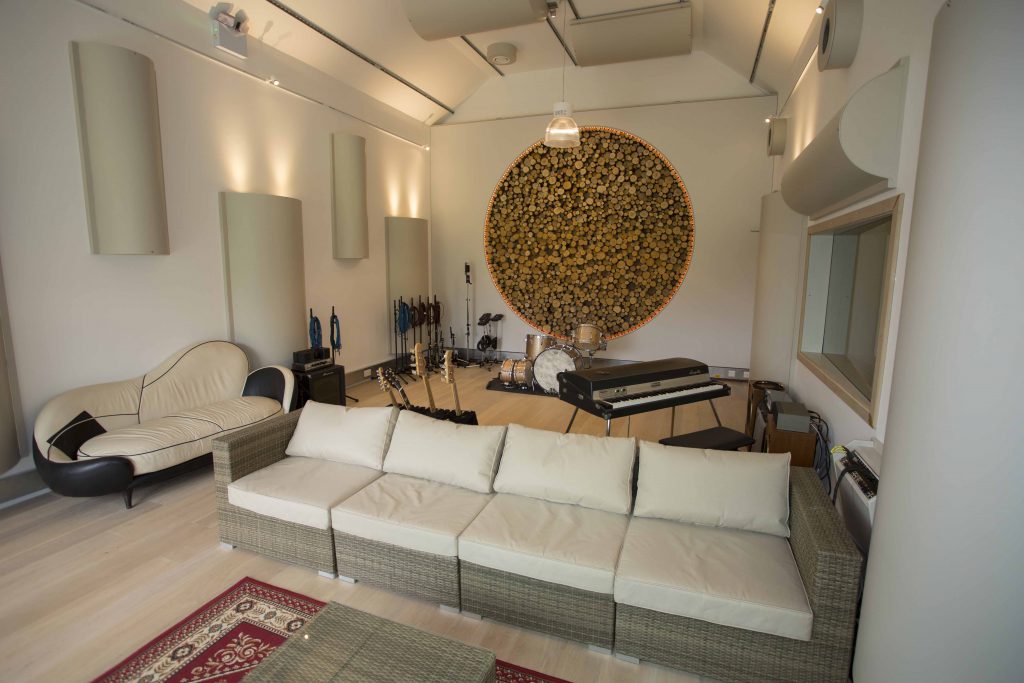 The large live room at Decoy