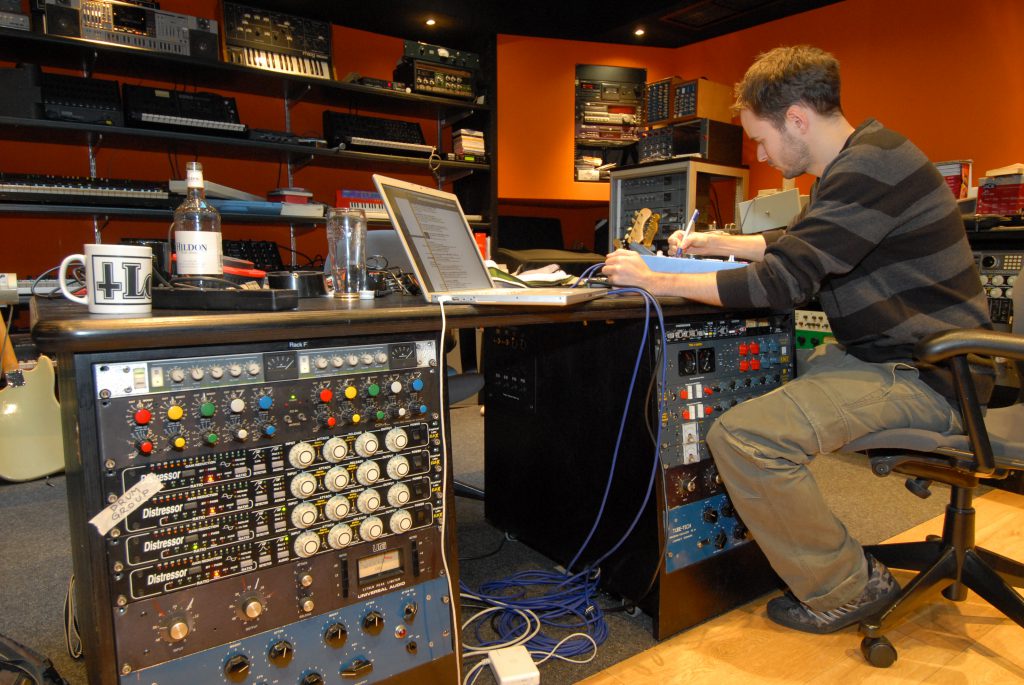 Steve Sedgwick, programming samples into the memory of an Akai MPC2000XL for an Africa Express gig

A Day In The Life

13 is not run as a commercial studio, but on the rare occasions Damon isn’t working on his own projects, it is hired out to others. “One of the great things about working here is that I get to work on a variety of different projects,” says Steve, “whether that’s recording a string quartet, band, or just Damon on his own.
“When we first relocated we were mostly working on stuff for Monkey: Journey to the West, recording the demos that were scored out for the opera. After that, at the start of 2008, we made an album from that music. The original demos were quite electronic sounding, using a lot of programmed synthesizers and drum machines, but for the album we added all the stuff that was played live. We recorded all the strings and an 8-piece choir in the big live room, and layered it on top of the electronic sounds. Then, during the mix, we stripped it back again, taking out things that weren’t needed.
“Since then we’ve been recording various artists who Damon’s been collaborating with. We’re just beginning a new project, but it’s in the early stages so I can’t really expand on that.
“When Damon is working upstairs he records his ideas on an old cassette four tracker and brings the demos down to the studio. I don’t always know what he’s prepared beforehand so it is exciting for me. The demos are a mixture of all sorts of sounds, but mostly piano. His demo is usually only a rough guide but we’ll transfer things to Pro Tools if he’s done something that has a particular character which is hard to recreate. It may, for example, have a certain quality that he likes, in which case we’ll sample and edit it from there, probably programming some drums and recording some synths and keyboards on top.
“Damon usually has a pretty good idea of what he wants to do so we work really fast. He’s a family man so we start and finish early and don’t usually work late into the night, but in the space of a few hours we can get a lot of stuff done. He is very focused, so we don’t have to spend 12 hours on a session. He’ll be jumping from synth to synth, trying different instruments and getting it all into the computer – just recording loads of stuff really quickly. Then we go through a process of listening back, editing different parts and looping things. Once it’s all playing back out on the desk it is easy for him to move faders, take things out, and see what’s working.
“A lot of different stuff gets used because we also have loads of keyboards stored upstairs. We go through stages of using certain instruments, but if we want a different sound we just go to the store room and pick three or four different keyboards.
The Hammonds also get used a lot and, at the moment, we’re using a lot of old Korgs, like the MS20.” 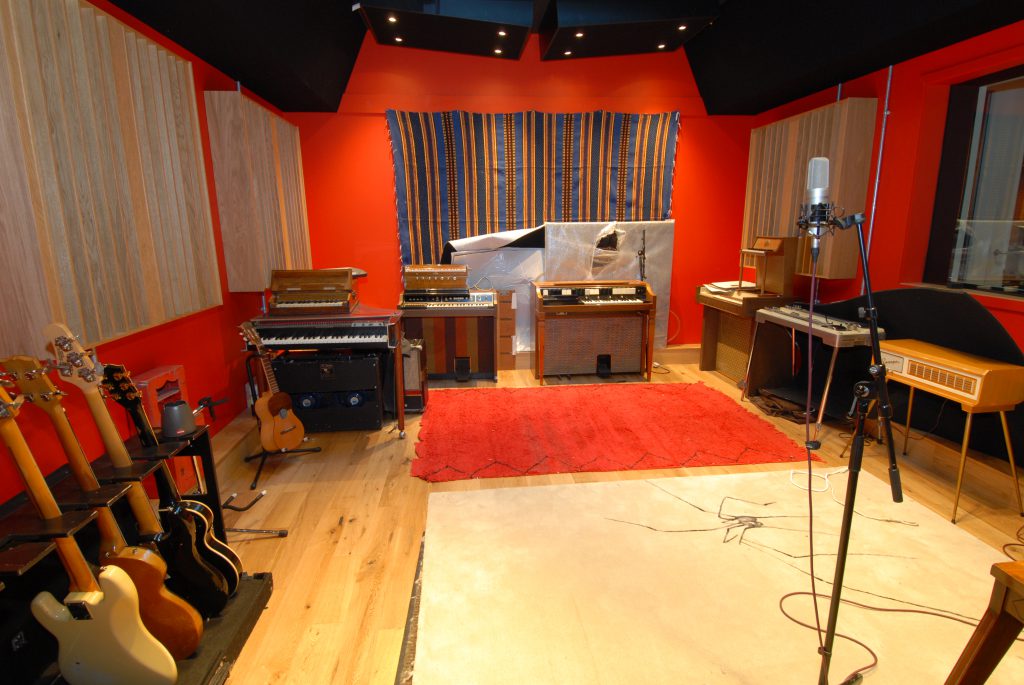 The smaller of the live rooms is full of vintage keyboard instruments, plus some very nice guitars

Processing and Effects
As far as studio processing goes, there presence of six Empirical Labs Distressors in the racks clearly shows that the product is a firm studio favourite. “The Distressors are great compressors and very versatile,” agrees Steve. “They are good on drums and vocals and for general recording. We have a lot of outboard but they are definitely favourites. We don’t have them patched across the drums all the time because we also have other good compressors, like the Chandler TG1, API 2500 and SSL compressors, but the Distressors work pretty well on drums.
“We have quite a few delays and like to try out different ones, like the AMS DMX 1580s, Bel BD80, and Roland space echos. We’ll often plug in one of our favourite spring reverbs or delays before a session, just so they’re ready and we can get a vibe going really easily by simply raising the faders. Having so many channels on the desk is good because we can plug loads of stuff in and have it there ready, although nothing is hard wired. We have all the synths and outboard in the patch bay so that everything is easily accessible, and that helps us work really fast. It’s a big improvement over our old studio.”
It’s clear from the vast collection of gear at 13 that Damon still has a preference for using hardware rather than software plug-ins. Steve explains the simple reason for this. “When you are on your own it’s easier just to put plug-ins on things, but when you have a group of people working together then it’s easier for everyone to get involved if there is lots of hardware. We don’t use a huge amount of plug-ins, maybe a few basic processors and compressors in Pro Tools.” 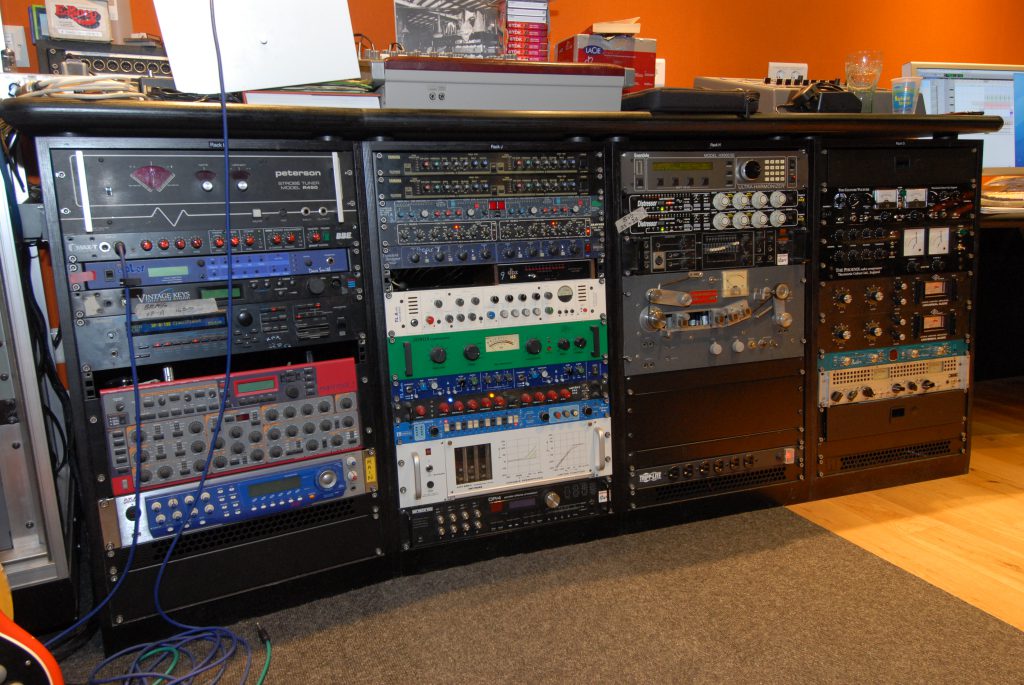 One of the rack panels in the control room

The Verdict
A year on from the move, Steve is confident that 13 is a big hit with Damon and everyone else lucky enough to work there. “Everyone loves it,” he insists. “We’re all very at home here; it’s a very inspiring place to be, surrounded by so much equipment. Bands walk in and are like kids in a toy shop, just because there’s so much here. Some commercial studios feel a bit clinical because they need to be a blank canvas. Here there’s stuff lying around, which makes it feel more homely.” TF