In Part 1, Cenzo explained why he moved his studio from London to the rural countryside of Suffolk, and described how the various rooms were designed. In Part 2 he talks about the equipment in his mix room and explains how he uses it.

Cenzo’s mix room is a huge space, with floor to ceiling window in the side wall and sliding glass doors instead of a wall at the end. The emptiness in the middle of the room creates the illusion that there isn’t much equipment inside, however, on closer inspection it is clear that the shelves and flightcases positioned around the edges of the room are packed with classic vintage gear and the best modern processors and interfaces.

Key to it all, however, is a large 56 channel SSL G6000 console, which Cenzo uses in conjunction with his Avid Pro Tools setup.

“The SSL came from a Japanese TV studio and had had the power supply modifications they do to all their SSLs,” said Cenzo. “Keith Skerrit of Funky Junk brought it back from Japan and rebuilt it for me. It is very difficult to find good SSLs over here now. They’ve all been chopped up and used for channels strips.

“Chris Jenkins, who designed the G-Series, for SSL has been here a couple of times and said that it’s probably one of the best ones he’s seen, and that’s down to Keith Skerrit. Keith also cut it down to from 72 channel to 56 for me.

“It uses VCAs, I don’t use I don’t use moving faders so it doesn’t have Ultimation. All my automation is done in Pro Tools.

“Then I have an Avid Pro Tools HDX system which has 64 outputs and I use it for tracking outputs as well as managing hardware inserts. The inputs and outputs are mainly the new Avid HD I/O, but my printing tool is a Lavry Gold AD122-96 MkIII stereo A to D converter. And I also have three stereo Lavry M-DA824 D-As which I use for stems if I am using multiple or groups of outputs.

“I have three mix busses and on each one I’ll have different inserts. Generally there is a Cartec EQP1-A valve equaliser on one, a Kush Audio UKB Clariphonic equaliser on another, and Maag EQ4s on my drum mix bus, so my mix busses will probably be drums on one bus, vocals on another and music on the third. But because the matrix in the middle of the 6000 allows you to send any of those mix busses to anywhere, I change that around, so I can send mix bus A to mix bus C if I want.”

“Usually the drums are send to mix bus C which has an insert of a Maag EQ. Maag used to make the EQ3 NTI, but now they are 500 Series format and have an amazing Air and Sub band. That will go into a very old Neve 33609 compressor.

Mix bus B is generally music. It has two Cartec valve EQs, which are Pultec copies. Liam Carter has gone to the nth degree and has even made valve power supplies for them so they are really very authentic. And they have an edge over old Pultecs because my left and right line up very well. I’ve tried lining up two Pultecs in the past and they won’t.

“But I can send the drum mix bus into the Cartecs and Pultecs as well, and those three busses will be summed by the desk to a pair of outputs that go through an Analogue Tube AT101 which is a Fairchild copy, built buy a guy called Simon Seywood. It’s a massive valve compressor and it’s a beautiful beast. That is the last stage in the chain before it goes off to the Lavry.

“So the SSL is a very flexible console in that it allows me to send things without much patching, and if you are doing a lot of mixing you want to do as little patching as possible, so the more routing flexibility you have the better.

The mix room desk with view out to the lake 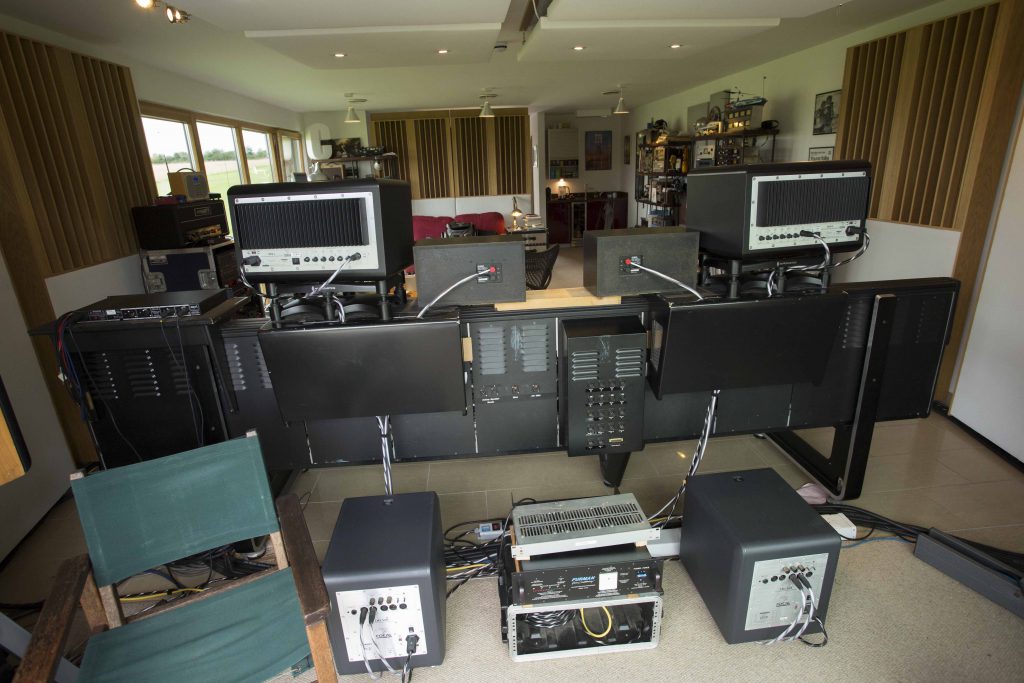 The mix room as seen from the sliding doors

“I also tend to use a lot of hardware inserts permanently patched in Pro Tools and I just insert things through my I/O bus instead of over channels. So on the Pro Tools I/O inserts page you have pairs of outputs which are dedicated for inserts and over those I have about 10 dedicated bits of outboard which I use on every mix.

“I can also chain things over a vocal or a guitar and I don’t have to patch anything on the patchbay. All that stuff stays the same. Obviously if you are reamping something or trying different tape or vocal delays then you have to patch those, but I usually print those so it is committed and done and when I come back to a song it is very quick.”

Even when Cenzo has to return to a project after mixing something else, and has to reset all the hardware, he does not find it too much of a hardship. “It is very quick to get back,” he insists. “Obviously it is slower than an in-the-box mix, but I found that it is quick enough at this point. You have got to be able to come back to things, because people expect changes far more now than they used to. I’ve got three or four mixes out waiting for approval and I haven’t heard back for two days, which used to be unheard of, and now it is quite normal. But I can’t wait for people.

“We use a software recall system called Teaboy which is fantastic. My engineer Joe opens his laptop, resets the song and every piece of outboard gear is there as a photograph and you can move the knobs on the photograph to show exactly where everything is, so we can do recalls very quickly. And the fact that we don’t have to patch much saves enormous amounts of time.

“Of my outboard, I really like my Neve 33609 compressors. I’ve got three which I use for everything. And I’ve got two UREI 1176s which I couldn’t do without and I use on everything. They are generally reserved for vocals but if, for example, I choose to use an EAR for vocals then I can’t wait to use the 1176 for something else. And my Teletronix LA3A which I couldn’t do without.

“For Bass I tend to use a Teletronix LA2A, and I reamp bass DIs a lot through a Hiwatt amplifier because it gives bass the presence and grit it needs to sit in a mix.

When asked what it is that the analogue processors, in general add to the sound, Cenzo is quick to answer. “Definition, colour, presence, and space, but without using much reverb. I don’t like using a lot of reverb if possible, unless it is meant to have it, and if I do, I quite like using Altiverb or Trillium Lane Labs springs.

We’ve got lots of outboard springs and we reamp through guitar amp springs to add colour and interest. Not just for guitar, though, for anything, including vocals.

“And I’ve got a couple of stand-a-lone springs like the Audio Kitchen reverb, which is basically a spring in a guitar head. That’s just amazing and is one of my favourites.

“So we try to add that kind of stuff which I prefer to only using the plug-in equivalent. There’s nothing wrong with plug-ins, I just find that if I am using a UREI 1176 for parallel compression on vocals it sounds a lot better than a plug-in. There is something about the way it distorts, especially in the high-mids, that adds something to the vocal. It doesn’t particularly make it distorted, it just brings the vocals out of the mix a bit and helps differentiate them from everything else that’s going on and obviously that is the most important part of the mix. So I tend to use a lot of analogue on the vocals.” 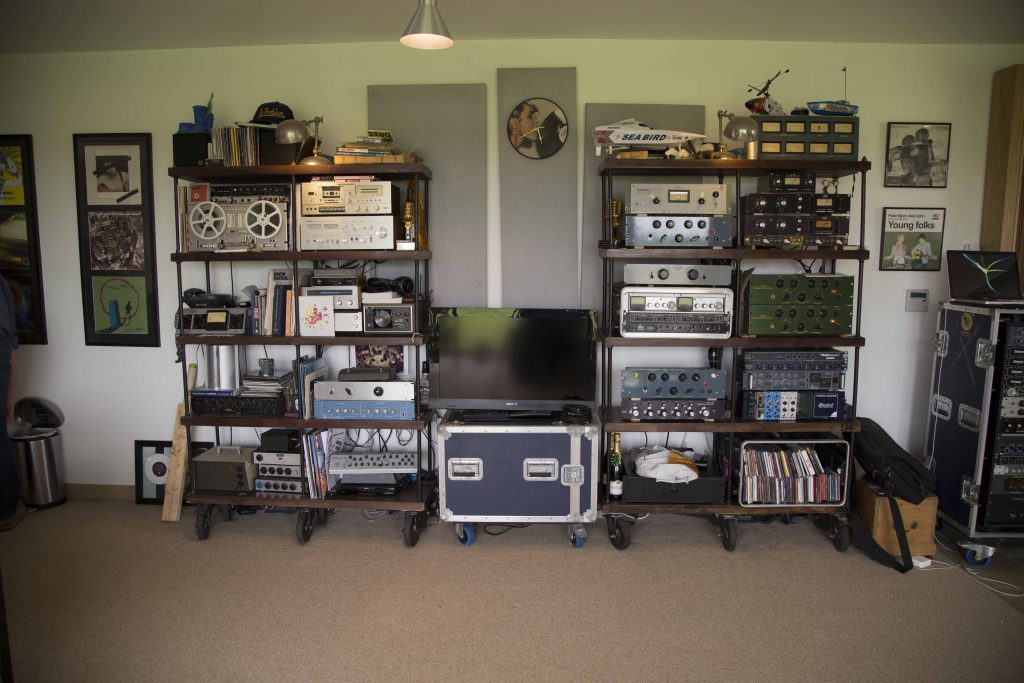 “I’ve been through lots of different speakers but in my mix room my big ones are ATC100s, mid-filed monitors are Focal SM9s and my small ones are Yamaha SN10s. I’ve got some PMCs which I love, but I am not using them in the mixing room at the moment because I find that there is something in the relationship between my Focals, NS10s and ATCs that works really well. And while I’m sure the PMCs are far better than two of the other brands of speakers, they don’t work as well with everything else. We flick between them and I also use a little radio.”

“You can’t get by without NS10s. I’ve used them since the 1980s, when I started listening to music in studios. There are lots of better speakers out there but for me they are my benchmark and I know the balance you should be able to get on them.

“Obviously an NS10 will sound marginally different depending on the console and room and amplifier, but the lovely thing about working in your room all the time is you get to know the sound of the room and the speakers. We use Briston 4B and 3BSSTs amplifiers here, and they are just amazing.

“We also use KRK 9000Bs which I also grew up with. There’s a choice of speakers for people to use if they want to, depending on what kind of music they are doing and what they want to hear.”