Gorillaz, The Good, the Bad & the Queen and Monkey: Journey to the West are just three of the many projects British musician and composer, Damon Albarn, is deeply involved with at the moment. It’s no wonder then that in order to cope with it all, his studio has moved to new, bigger and better premises. we take a peek inside. 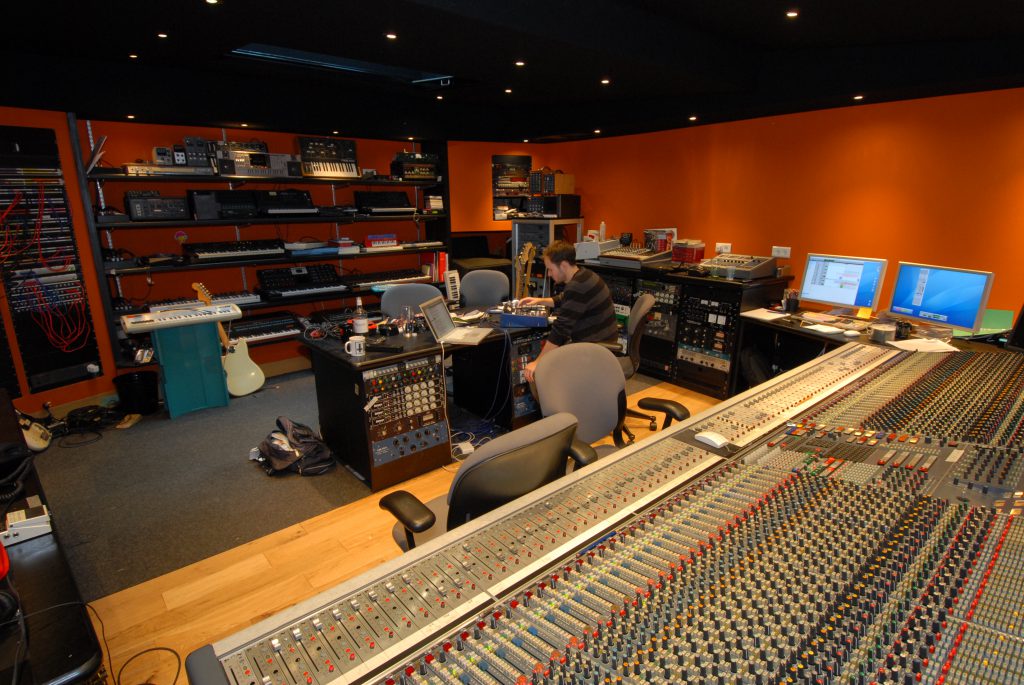 The control room at 13

When a band splits and the individual members begin forging solo careers, it is often fascinating to see what musical paths they take. Since Blur’s penultimate studio album, 13, front-man Damon Albarn has emerged as the most active in his pursuit of unusual and intriguing projects, exploring African rhythms for his Mali Music project, and mixing hip-hop with animation to create Gorillaz.
To record his solo work, Albarn set up a studio in the late 1990s, calling it simply 13. The premises sufficed for many years, but the recent purchase of a huge Neve VR 72 desk and the production demands of his latest projects meant that a move to somewhere bigger was unavoidable. After some important construction work, the new studio 13 was up and running by September 2007, and is now starting to gain the lived-in look preferred by its owner. “When we first came here everything looked so new and perfect,” laughs Charly Allen, Damon’s PA and studio manager, “but Damon likes things much more lived in and not too clinical, and we’re kind of getting there now! It’s just very easy for people to hang about and work here. We regularly have people drop by and they don’t get under our feet, so it’s a nice relaxed feeling.”
Charly estimates that the new live room alone is almost as large as the whole of the old studio, yet there is now a vast control room, a second smaller (but still sizeable) live room, a rather useful dispatch space for loading and unloading gig equipment and accommodating arriving musicians. What’s more, that’s just the ground floor – there are two further floors above!
Before 13 moved into the building, it was little more than an empty shell, having previously been a paint factory workshop. Its location, relatively near to Damon’s home, was a definite selling point, the only drawback being that the ground floor space wasn’t large enough. The solution was the building of an extension into the back yard, creating the control room and the smaller of the two live rooms, each fitted with large skylights to provide much-needed natural light.
“Behind the control room is a railway line,” explains Charly, “so the builders had to reinforce the wall so the vibrations wouldn’t affect our recordings. It took about a year to finish all the work. A lot of thought went into the layout so that, for example, everything in the control room is easy to see and at your fingertips. And we made sure there were big windows so you can see through from the control room into both live rooms.” 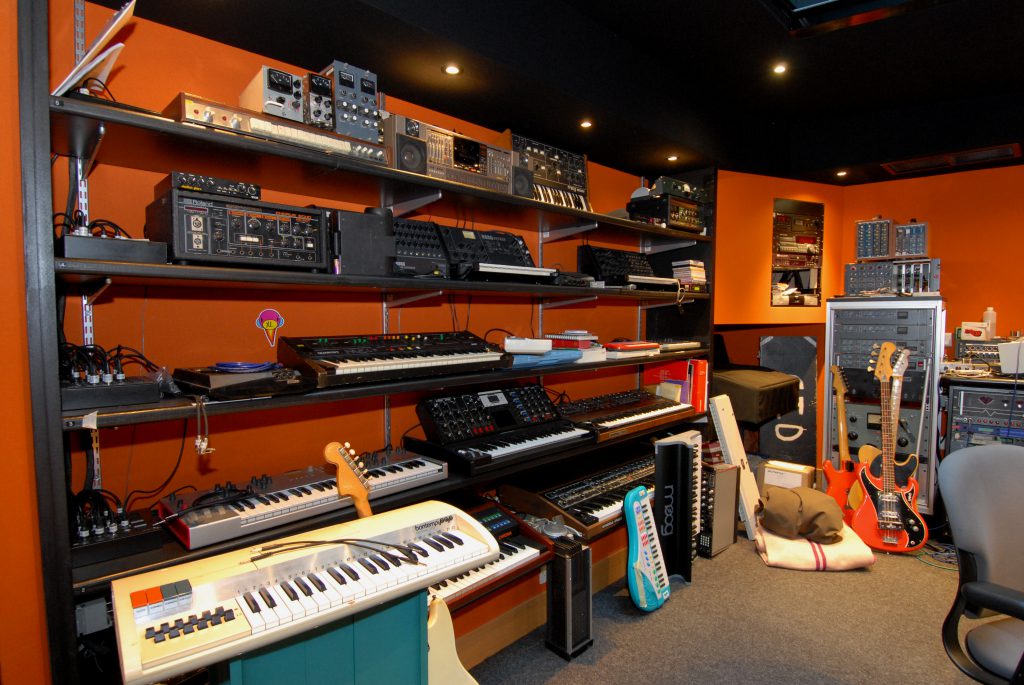 Just some of the synths and keyboards at 13

Looking Up
Fans of Gorillaz, will be fully aware of Damon’s long term collaborations with comic-book artist Jamie Hewlett, who recently designed the set and costumes for the stage opera Monkey: Journey to the West, while Damon wrote the music. It is his art studios which occupy the second floor of the paint factory, making future collaborative projects much easier. “The old studio was on one level and within a whole block of other studios,” explains Charly, “but Damon wanted space for Jamie to come in with his team, which makes sense when they do so many projects together.”
Just below on the first floor is Damon’s private writing room which he uses to record demos and hone ideas. We were allowed to peek through the doorway but, to respect his privacy, no pictures were taken. The room is now home to the TL Audio VTC desk, which was central to the previous studio, plus an old upright piano surrounded by several stand-mounted microphones. The setup clearly enables Damon to make some fairly decent recordings, but first and foremost it functions as somewhere he can relax, as is evident from the pictures hung on the walls and bookcases full of personal items.
Further along the corridor, past the administration offices, a door leads out into a roof garden, created when the extension was built. This space allows everyone take some air without having to venture onto the street, and is home to the recreational basketball ring and ping-pong table! 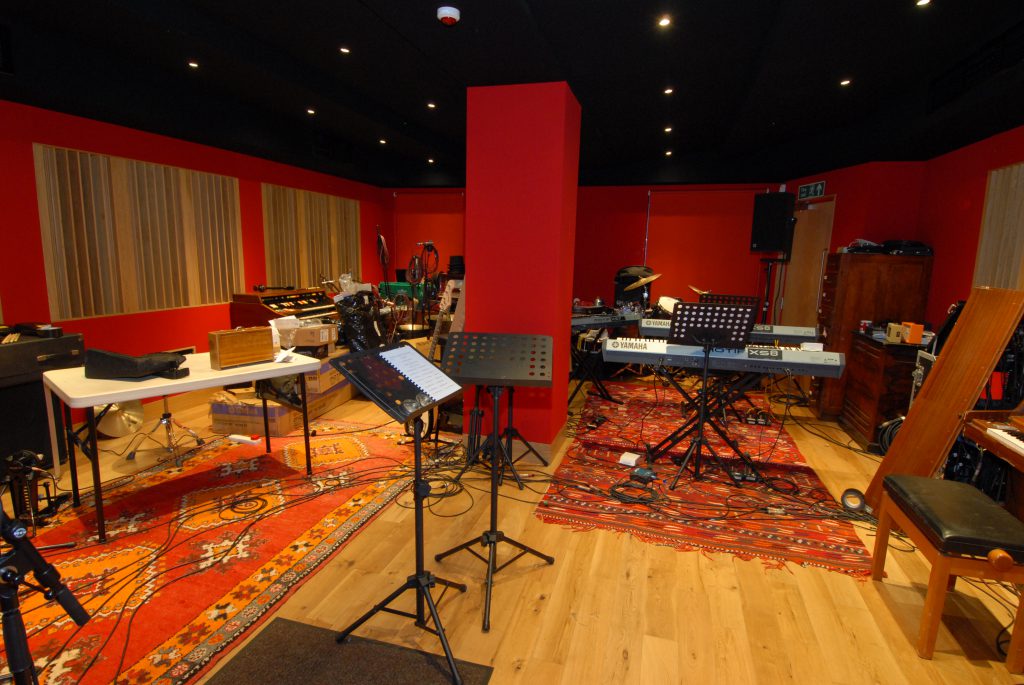 The Setup
Unsurprisingly, much of 13’s recording equipment has been carried across from Damon’s previous studio run by Jason Cox and Tom Girling. Even some of the layout ideas have carried across, such as the wall of keyboards perched on shelves opposite the desk. This time, however, the more acoustic keyed instruments are located in the smaller of the live rooms, across the hall to the right of the control room. Inside are a number of Hammonds, some very ancient pianos, a Fender 1000 Pedal Steel, Farfista Pianorgan I, Baldwin baby-grand and a rack of vintage Gibson guitars.
The percussion instruments are found in the larger live room, situated to the front of the control room. Here, for example, are a set of large church bells which, at the time of our visit, happened to be packed away in the corner to make way for several Yamaha MOTIF XS7 and XS8 keyboards. The room also contains many vintage amps, stored against the studio walls together with a Hammond SS1 Sound Simulator and a Pianolodeon. Below the control room window, is the studio’s semi-permanent drum and percussion setup, comprising an acoustic kit, various shakers and blocks, a Roland TD20 V-Drums brain, SPD-S Sampling Percussion Pad and an Akai MPC1000 sampler. A patch named ‘Monkey’ was loaded on the sampler at the time of our interview, and several musicians bustled around having just finished a performance.
Even the hall, running from the loading bay/reception area to the studios, is a temporary home to yet more gear (Bontempi Organ, Roland JX-3P and VP-550, JEN String Machine 3m-2007) including a gothic looking set of church pipes. Finally, at the very end of the corridor, the studio’s Pro Tools hardware rack has its home.
At the time of our interview, Damon was dashing to a gig leaving engineer and interviewee, Steve Sedgwick, desperately programming samples into the memory of an Akai MPC2000XL. It turned out that the MPC was a vital part of an Africa Express gig, and had to be shipped across London in a Taxi with Steve, the moment he’d finished.
“Africa Express is an organization comprising lots of Western and African musicians who get together and have a big jam session,” explained Steve, who has been working at the studio ever since his talent was recognized by Damon.
“I met Damon at the end of 2004 when he was making the last Gorillaz album,” Steve continues. “I was working in The Pierce Room studios in Hammersmith, and Damon and his other engineer, Jason Cox, came in to mix the album. I spent a few months assisting them and when they were looking for another engineer they gave me a call.
“They mostly wanted me to do Pro Tools programming but also help out with the engineering. They’d just bought the Neve VR 72-channel from Whitfield Street Studio, which was the same model I’d been using at The Pierce Room, so I was very familiar with that desk.
“I worked at Damon’s old studio as well, which was an amazing place, but with the amount of equipment we have we just needed more space, and the VR would never have fitted. Now we’ve have the space to get a lot more things set up at the same time so we can work much faster and it’s a lot easier. Having got a bigger desk, we wanted more inputs and outputs. Previously we had two 192s, 32 outputs and 16 inputs, but we’ve now got a HD3 system running on a Mac G5 with four 192s, giving us 64 outputs and 32 inputs.”
According to Steve, one of the drawbacks of the previous studio was that it wasn’t ideal for mixing. “We couldn’t really mix with the VTC, but now we have more channels, a bigger Pro Tools system and the monitoring is a lot more accurate, partly because the rooms are properly acoustically treated.
“Our nearfields are KRK 7000 series monitors. The company stopped making them a few years ago but they are really good. The main monitors are Dynaudio M4s which are also what they have at The Pierce Room. A lot of main monitors just sound like PA speakers, which is good for getting a vibe going but they have too much bass to be accurate so you can’t balance levels. The M4s are really good and have a clear top end, so you can mix on them.”