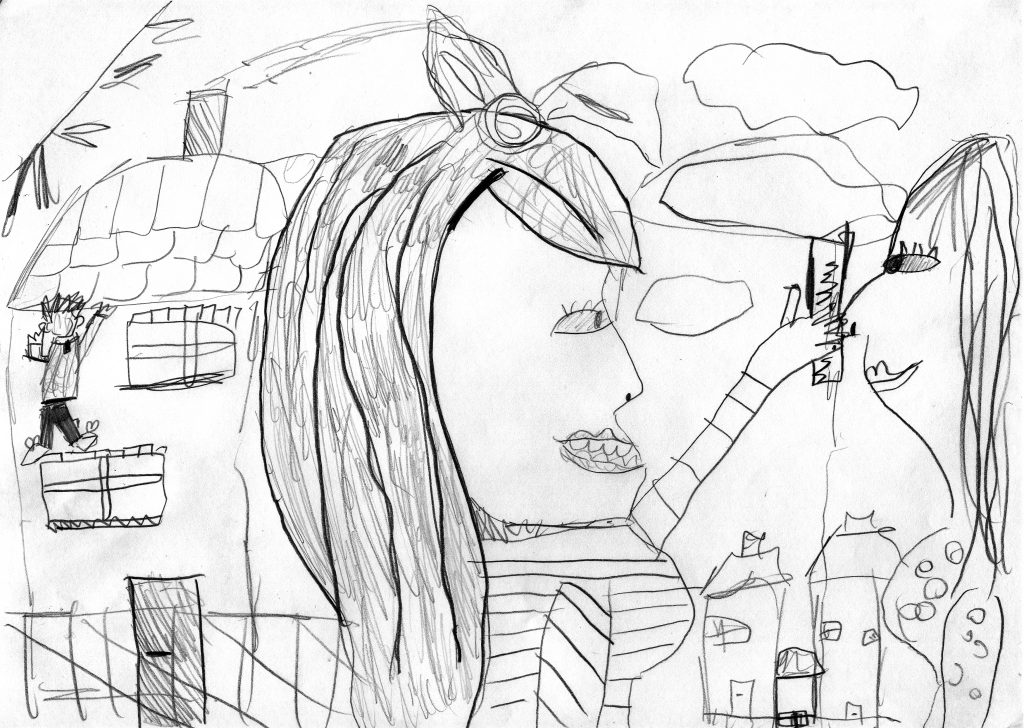 Gradually the dream split. It had been a truly engrossing one and the outcome was important to know. Despite the allure of the dream’s narrative, the morning light and daytime noises were conspiring to distract. Albert clung to his half sleep, digging for the ending which his sub-conscious must surely have completed. It was of no use. He was awake. The dream was lost and only the buzzing remained.

There were, of course, the myriad of birds which sung opera in the trees outside, not to mention the constant drone of passing cars; however, these were sounds with a source – a known origin and creator. The buzzing, on the other hand, had nothing of the sort. Nor did it seem to have a focus; it merely hung, like a scent in the air.

Albert’s ears had accidentally selected the buzz, probably because of its foreign nature. This particular formation of colliding air particles was not a familiar visitor to his room, or his cochlea.

Curious and perplexed, he had to give the sound a face. He pondered: cars, drills, fridges, electricity pylons, air conditioning units, insects; perhaps space invaders. He rejected all of the possibilities he came up with, one by one. He was certain that he was not imagining it.

Albert swung his lazy legs out of bed and stood up. Perhaps a change of polarity would help make more sense of the buzz. Indeed, without the loud rustle of a pillow filling his ear canals, listening was made much easier. Nevertheless, there was still too much distance between Albert and the sound.

Albert was determined to quickly understand the mystery and, in this state of mind, had not thought about breakfast once. This was uncharacteristic of one who almost always packed away huge portions of toast and cereal long before the hour hand had had a chance to reach eight. It was already gone eight thirty, but this time Albert’s interests lay elsewhere. For sure, no peace of mind was going to be had until the sound was identified. He had become hypnotised and addicted, hungry for knowledge and as curious as a dead cat. The buzz went on.

Soon Albert was leaning out of the window, tilting his head this way and that in an effort to find the most enduring tone. He had begun to worry about it stopping. At first he had been irritated by the sound and wished it would stop, but his growing fascination meant that he now desperately hopped it would continue, at least until he could pinpoint it and reveal the cause. Was it far away and loud or close and quiet? Unfortunately, it was one of those sounds which proved difficult to judge.

After dressing just about adequately enough for general public exposure, Albert rushed downstairs, through the kitchen and out into the front garden. He desperately needed to visit the toilet and his stomach groaned for food, but these things would wait; the buzz might not.

Albert jerkily paced around the garden for a whole 20 minutes trying to locate the sound. Passersby thought him to be an unstable madman. He was, after all, dressed somewhat erratically and looked quite odd. Then there was the way he kept twitching his head, grasping an ear, crawling on the ground and pressing his head up against brick walls.

“Perhaps he’s a monkey,” jibed a passing spectator pointing Albert out to her friend.

No one else had noticed the buzzing. Albert noticed nothing else.

Then, all of a sudden, Albert began to climb. He had jumped up and grasped the black drain pipe of the house.

“Look. I think you were right!” said the spectator’s friend as she glanced back down the road towards Albert’s house. The pair stopped walking and watched.

Bracing his feet against the walls of the house and gripping the cast-iron water chute with both hands, Albert rapidly ascended the house. He ignored the ominous creaking and rose up and up, past his bedroom window and onwards still. After one final, exhausting lunge, Albert’s forehead knocked into the underside of the gutter, painfully indicating that he had reached the top. He stretched one hand over the lip of the gutter, did the same with the other, and hauled himself up. His head raised above the rim, Albert could finally see along the whole length of the roof.

“Goodness me, so that’s it!” he said, happy, relieved and astonished. It was almost exactly at that point that the rusted steel nails which had held the drain pipe and gutter to the house for the previous 65 years tore away from the crumbling brickwork. Gutter, drain pipe and Albert fell to the ground. The doctor blamed madness. The vicar at the funeral blamed the devil. Albert’s family didn’t know what to blame. The buzzing, of course, had stopped. TF

Liked this story? See last months offering, The Tip, which can be found here: The Tip