Most householders want to save energy, whether it is so they can cut their expenses or help protect the environment, but some schemes, claiming to be green and efficient, are the work of opportunist companies attempting to make crafty sales. 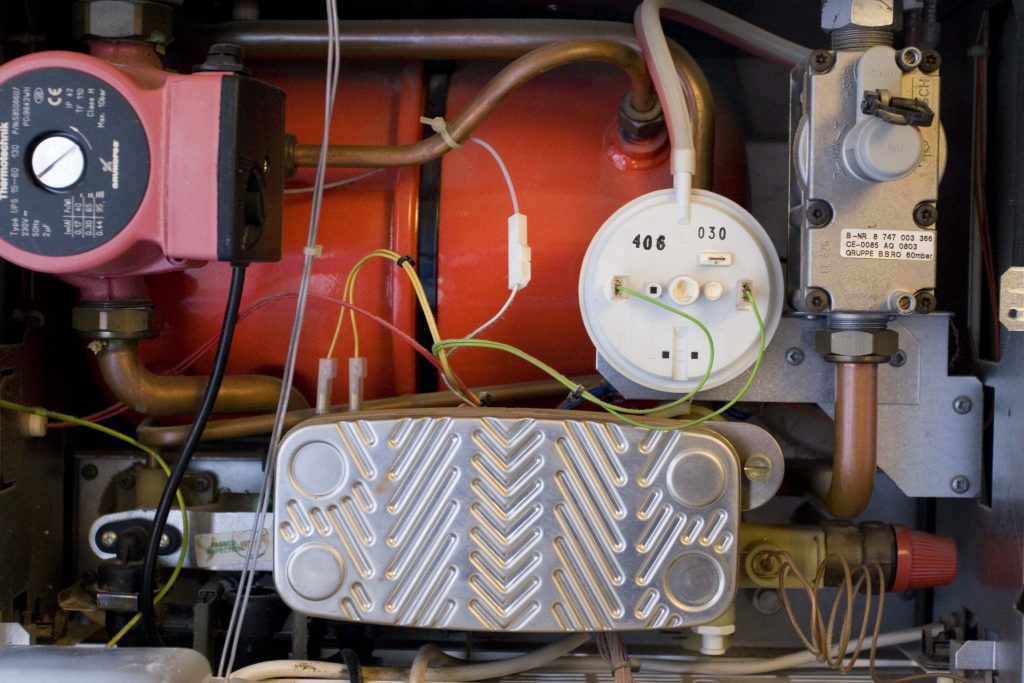 Appearing to be a helpful and caring company is undoubtedly a shrewd PR tactic, but in some circumstances it also serves as a means of selling extra services and products.

For example, in recent years my energy supply company has been sending money-saving advice along with my bills. The advice suggests that by following certain courses of action, energy can be saved, which is undeniably true, to an extent. Being a cynically minded fellow, my first thought is, ‘You want to help us use less energy because you are planning to charge much more for it, and hope to draw attention away from the inevitable huge price rise.’

While I’m sure that is exactly what they are trying to do, the inclusion of adverts for supposedly energy-saving products suggest that the energy company also sees it as a sneaky way of making some extra cash. Indeed, one promotion concerned itself with selling the idea that a new gas boiler could save its owner massive amounts of money, all because today’s technology is considered to be relatively efficient to that of a decade ago. The small print at the bottom gave a figure of £400 saving a year, for the average household.

Armed with this information, I took a look at my gas bills. Like everyone else’s, my bills have been going up dramatically in recent years, but, even so, the last few have only averaged about £450 a year. What’s more, that cost includes the gas feed to the cooker!

Clearly replacing a boiler would have no effect on the cooker usage, so it’s necessary to subtract at least £50 from the £450 bill, leaving a figure of £400 or less for the boiler’s gas consumption.

Now, if a new boiler saved £400, as estimated by the gas company, it would leave me with only cooker gas to pay for! Extremely unlikely. So what is a more realistic figure?

My boiler, which is now somewhere around 14 years old, is a fairly simple device, as all boilers tend to be underneath the glamour of the gleaming, pressed sheet metalwork. Inside, cold water is fed through pipes and these are heated by a series of gas burners. The heated water then heads off down the pipes to the open hot taps, radiators and shower. The whole process is pretty efficient, and makes use of the basic and unmovable laws of thermodynamics. Efficiency could only be bettered by finding a design which somehow improves the way the energy, as produced by gas combustion, is transferred to the water when it passes through the boiler.

Even by being extremely generous to the new designers, and assuming all those physicists working for the boiler company 14 or more years ago didn’t know their arse from their elbow, it seems unlikely that a figure of 20 percent efficiency improvement could be achieved. 20 percent of 400 is 80, meaning that even the most impressive and ingeniously designed boiler would only save £80, at best.

Then, of course, there is the rest of the system to consider. Various thermostatic devices can be used to control the temperature in rooms, and certain kinds of radiator configurations manage to disperse heat faster than others, but none of this can affect the wastage of the pipe runs connecting the boiler to its radiators. In most homes the pipes will, in places, dive under floors, pass by cold exterior walls, or even shove heat through to the neighbours on the other side of the wall. Sometimes the pipe runs will actually help heat the home, each one being, in truth, a long, drawn-out radiator. In other places they will lose heat to the outside world, undoing the small efficiency advantages gained by the boiler and radiator system.

In all probability, the £80 figure is almost certainly far too optimistic, and the real saving, if any, is more likely to be something like £40 a year. With that in mind, let’s now consider the process of installing that new boiler system, to see what the costs might be. Of course, the system could just mean the boiler unit on its own, but, when energy-saving figures are being quoted, it usually includes radiators and thermostats as well.

Two engineers head over in their van, brandishing the new boiler and all its accessories. They decouple the gas supply, drain the system, disconnect the pipes and set to work removing the old boiler. To fix the new one they may have to do some plumbing to modify the pipe runs, and will have to find a way of securing the whole assembly on the wall, but eventually they will get it all done and can start sealing everything up and doing the safety checks.

All in all, the labour and new assembly is going to cost around £1,500, or considerably more if the ‘inefficient’ radiators are also being replaced. But even if the cost only amounts to £1500, it will still take over 37 years of £40 savings to balance the installation expense.

Of course, these days, things aren’t built to last in the way that they once were, so there is no guarantee that the new boiler will last as long as the new one, and in all probability it won’t. It certainly won’t last 37 years. In that time several more ‘very efficient’ boilers will have come and gone, each with its own purchase and instillation cost. It might be the case that wastage of new boilers will be far greater than those sturdy old ones which just plodded on for decades requiring nothing more than a little routine maintenance.

Environmentalists might still look at the £40 as a worthwhile saving, as it represents less gas usage, which should add up to a considerable environmental saving if applied to large numbers of households. That is certainly what the boiler sellers like us to think, but once again, the issue is far more complex.

Environmentalists and boiler manufacturers might argue that any gas usage reduction is good, even if it is £40, because it means that the Earth’s resources are being saved and carbon emissions lowered. At least as far as the gas throughput of each house goes, this assertion might be true, but in order to achieve a reduction, there will be an increase in consumption elsewhere in the production chain.

Let’s start with the parts. The boiler assembly contains many pipes, a water pump, water tank, the burner and a heat exchange chamber of some kind, probably using special insulation, depending on the design. There has to be an exhaust flue, electrical and monitoring system, internal and external mounting brackets, a frame, and finally all the pressed and painted metalwork which make up the outer casing.

All of the above components are joined with bolts, screws, solder joints, rubber and nylon bushes and expansion joints. All in all, there are quite possibly hundreds of items on the parts list, and every one will have had to have been manufactured somewhere. Anything which is not an off-the-shelf component, so to speak, will require the design and manufacture of steel a mould, which itself will be formed in another factory.

All in all, thousands of machines, consuming electricity and oil will be called into action to make the parts for even the most rudimentary boiler.

Then there are the raw materials to consider. Every metal component is made from materials which have to be dug out of the ground in some industrial mining operation, and that includes the mouldings and machines that have been made to help form the boiler parts. If millions of home owners are pressed into buying new boilers, the resources used up to provide the hardware will be vast.

But still that is not all, for there is the matter of the old boiler and radiators. Assuming their precious parts are not going to end up dumped in landfill sites, they will need to be recycled before the material are ready for action again. In this process they have to be transported, disassembled, sorted, cleaned, melted and so on, all of which involves yet more machines and produces quite a lot of waste, in terms of polluted water and chemicals (paints and grease has to be removed somehow) not mention the fuel usage of the equipment used to do that.

As for manufacture, in all probability it will take place in a country where environmental standards are not so high.

Take a look at the short story The Tip, elsewhere on the Polymath Perspective web site to get a better idea of the interconnectedness of industrial processes. 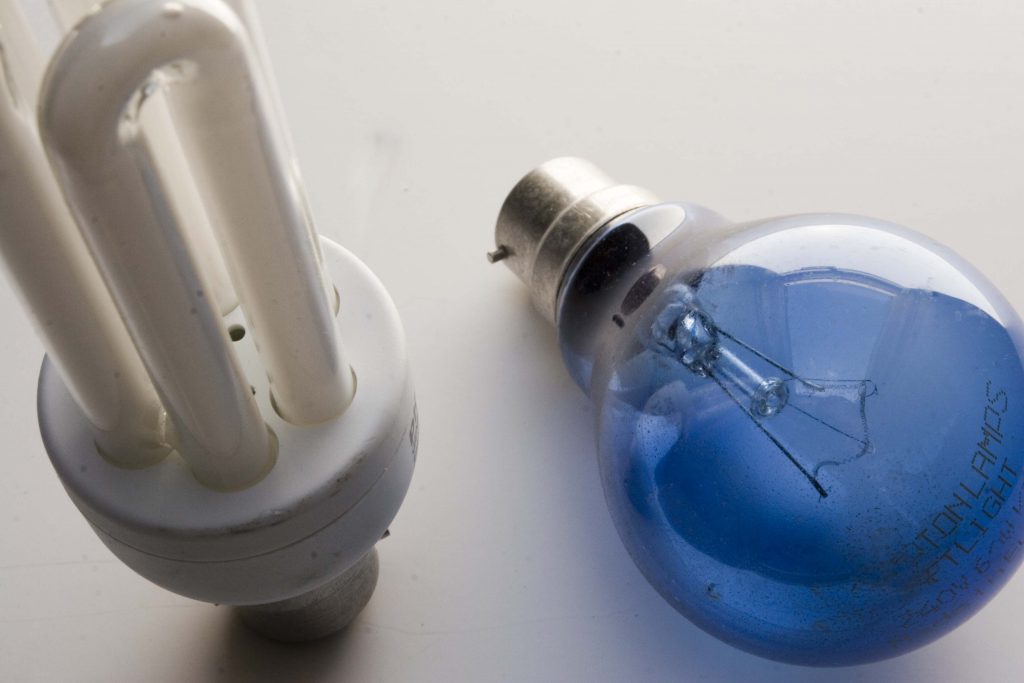 The old and the new

Boiler installation is certainly one example of companies exploiting the good intentions and money saving desires of the public, but it is certainly not the only one. A few years ago we were all being encouraged to buy energy-saving light bulbs, known as Compact fluorescent lamps, or CFLs, on the premise that they would cut electricity bills significantly. Given that most suppliers have used energy efficiency as chance to put bills up, it is hard to measure the savings in monitory terms, but there are some points to note.

For a start, most of the bulbs I have used have not lasted anything like as long as was advertised on the box and seem to have a shorter life span than a traditional candescent bulb. Many people bought energy savers thinking that they were buying something that would last decades, and would therefore work out the same as a series of normal bulbs.

In terms of energy use, the CFLs should be much more efficient. That is to say that they give off far less heat than the incandescent bulb. In a poorly designed office building, where heat is a problem and air-conditioning is used, a lower heat bulb is probably a good thing, but in a home the heat from a bulb is sometimes a welcome addition, and is really very similar to a bar heater. After all, energy cannot be created or destroyed, merely converted.

As for manufacture, there is clearly much more to a CFL than a traditional incandescent bulb. The old bulbs comprised little more than one piece of very thin glass, a hair-like twist of tungsten wire, and a basic metal neck assembly bearing the electrical contacts. The new bulbs, on the other hand, are made using a long, bending tube of glass, filled with gas. The bulky plastic enclosure at the end contains a circuit board and a number of components so there is much more to throw away when the thing goes wrong. And go wrong the certainly do. On paper, at least, their higher cost is offset by their longer life, but in practice they go pop just as regularly as the old-fashioned bulbs.

There are, of course, plenty of ways to save energy and be more efficient, but the chances are, if someone is trying to sell something, it is probably more for their own good than that of the planet or your wallet. TF 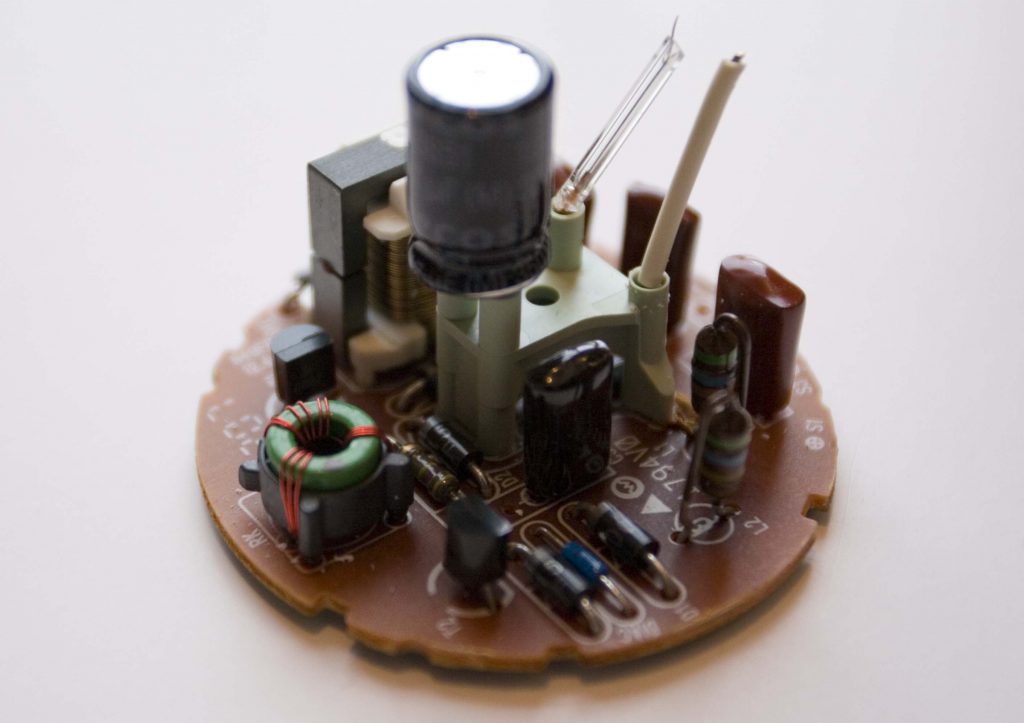 The board from inside an energy-saving bulb