Artist Tom Young was featured in our first Polymath Perspective issue early last year when he was living and working in Beirut. We catch up with him to find out about his latest work, created in France, London, the Caucasus mountains of Azerbaijan, Ground Zero in New York and inside a prison in Beirut. 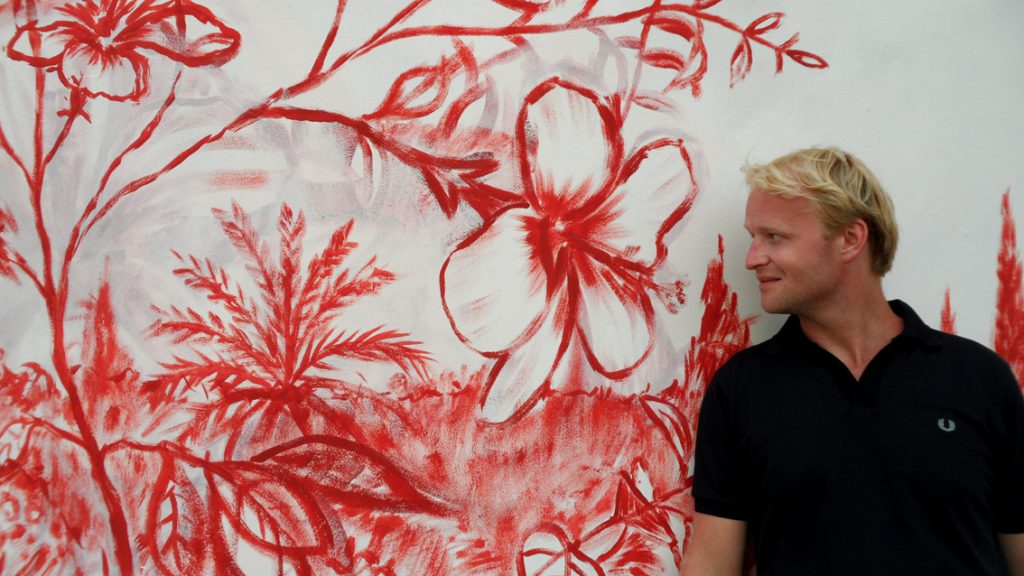 Tom Young standing by his unfinished mural in central Beirut

It has been an extremely busy and productive year for Tom Young, so we thought it was time to feature some more of his pictures and experiences. He was, of course, interviewed about his ideas and working methods in Issue 1 of Polymath Perspective. That interview can be found here: Tom Young: Painting in Lebanon

Never afraid of depicting the darker side of life in his work, in August 2011, Tom managed to gain access to a prison in Beruit, where he made some fascinating sketches and found time to study and work with some of the inmates. “I sketched portraits of all the prisoners and did ‘art therapy’ workshops with them,” Tom explains. “I made many friends and, in the end, it was strangely sad to leave them.”

Afterwards, Tom returned to England briefly, before heading abroad once more. “I did a commission in a chateau in the south of France, and what a contrast that was! Then I was invited to do an exhibition in Belgravia with my London agent, and work from that show got noticed by the Azerbaijan Culture Ambassador to Europe. I was subsequently chosen to go to Azerbaijan to represent Britain at an international art exhibition. I made paintings in the Caucasus Mountains there and those canvases were bought by the Azeris.”

The exhibition that featured Tom’s work was the Second Gabala International Art Exhibition, titled ‘Art! Life! Earth!’ and was jointly organised by the Cultural Fund of Azerbaijan and the Seoul-Baku (SEBA) Azerbaijani-Korean Cultural Exchange Association. 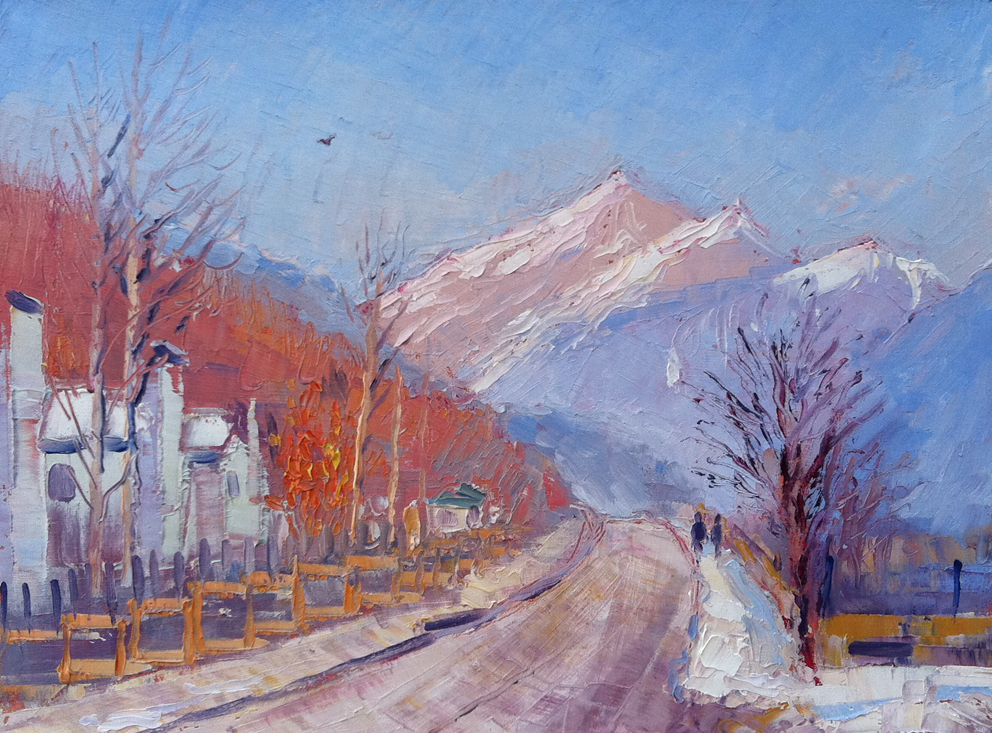 In January 2012 Tom was on the move again, visiting New York and sketching at Ground Zero – the site of where the World Trade Centre once stood. “I met a survivor from the September 11 attacks and he showed me around the memorial site, where there is a tree that miraculously survived the carnage and is still growing. This man had also, coincidentally, been in the CIA in Beirut during the Lebanese civil war in the 1980s. Having seen and painted what destruction America/Israel has caused in Lebanon and Palestine, it was interesting to see things from the other side and I was moved by his tale of tragedy and destruction from September 11. It also gave me an opportunity to present to him a perspective from the Arab world that he had not heard before.

“More recently I was commissioned to paint an ‘art jam’ for the Diamond Jubilee. I found it was good to get in touch with British culture again and make work about the extremes in our society. I painted it with my art jam collaborator Dominic Madden. We were on a roof by the Tate Modern as the flotilla went by on the Thames!”

A short film of Tom and Dominic’s art jam can be seen here: Jubilee Art Jam

Another of Tom’s art jams took place in Beirut, back in 2011. This time Tom was working with two other artists (Dominic Madden, and Noor Haydar) over a 24 hour period, creating the evolving image on three eight-foot by four-foot boards. A stop motion film of its progress is also on YouTube, here: Beirut Art Jam 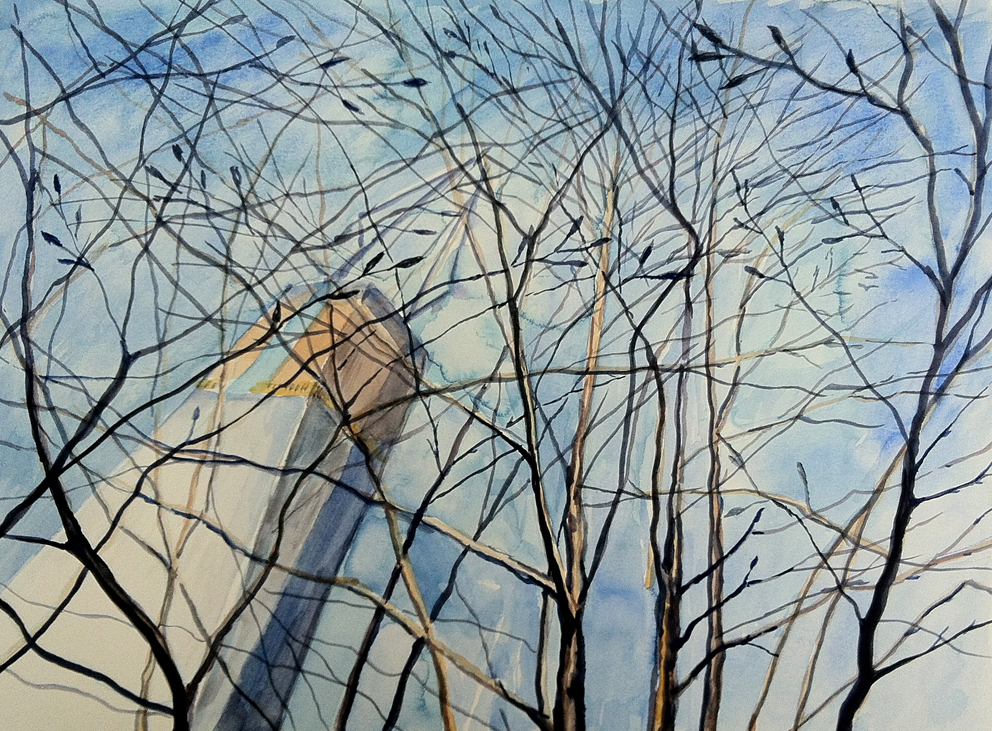 Before leaving Lebanon, Tom was commissioned to paint beautiful landscapes of certain beloved places by a number of private clients. One of the most unusual of those was to create a mural on a wall in central Beirut.

“I was commissioned to paint a mural of a garden to give an impression of the garden that was once there,” explains Tom. “It had been damaged during the Lebanese Civil War, and subsequently bulldozed by the main city corporation to make way for a car park!

“The woman whose father had built the house was heartbroken by the destruction. She saw my exhibition in Beirut and was inspired to commission me to recreate the garden in a painting. She was doing something to honor his memory, restore her spirit, and bring some beauty back to the neighborhood. She is one of the few remaining individuals to retain private ownership of property in the area.

“The commission was executed as a form of ‘fine-art graffiti’, made without the consent of the local corporation, because it was they who were responsible for taking away the garden.

“I worked fast to resurface the wall and sketch out the composition in red undercoat paint, but the city corporation stopped the project because I did not have official permission and I was not allowed to finish the painting. However, the sketch was allowed to remain and, to this day, the drawing is the only permanent public mural in central Beirut.

“I used a nearby Palace garden as inspiration. I studied flowers and trees that are indigenous to Lebanon in a series of pastel and watercolour sketches. I then pieced elements of these sketches together to make one composition of an imaginary garden.”

For another commission, Tom worked for the Al Kamandjati Music School, teaching children in Palestinian refugee camps. He says, “I’ll be continuing this work with displaced people in my own country this summer, doing art workshops and a mural with homeless people in a shelter just off London’s Tottenham Court Road.

“It’s something I can do for children who have real disadvantages in life. Encouraging them to express themselves through art and music is precious and they teach me as much as I teach them. Music and art is a language we all speak so it is a common ground. It gives the children a way out of their circumstances, a way to process the trauma and frustrations they experience and to imagine a better life. You never know when you may have set off a spark of inspiration in someone. If it happens to one kid, then it is worth it.

“Most recently I’ve been commissioned by the Olympic Broadcasting Services to paint their headquarters at the London Olympics. The painting is titled ‘Olympic Sky’. The building is hideous so I tried to concentrate on a beautiful English sky to bring the scene to life. They have ordered 300 limited edition signed prints of the painting, which will be presented to heads of the world’s media. The original painting will hang in the Olympic Media Central office in Madrid.

“On the same day I visited the headquarters, I went to an evening lecture by John Carlos. He was one of the infamous ‘Black Panther’ athletes who raised a fist in support of all the minorities in world who suffer discrimination. I met him, we chatted and I was inspired by his story.

“In my painting, I etched his name in the windows of the Media Centre as a subliminal message that may or may not be noticed!” 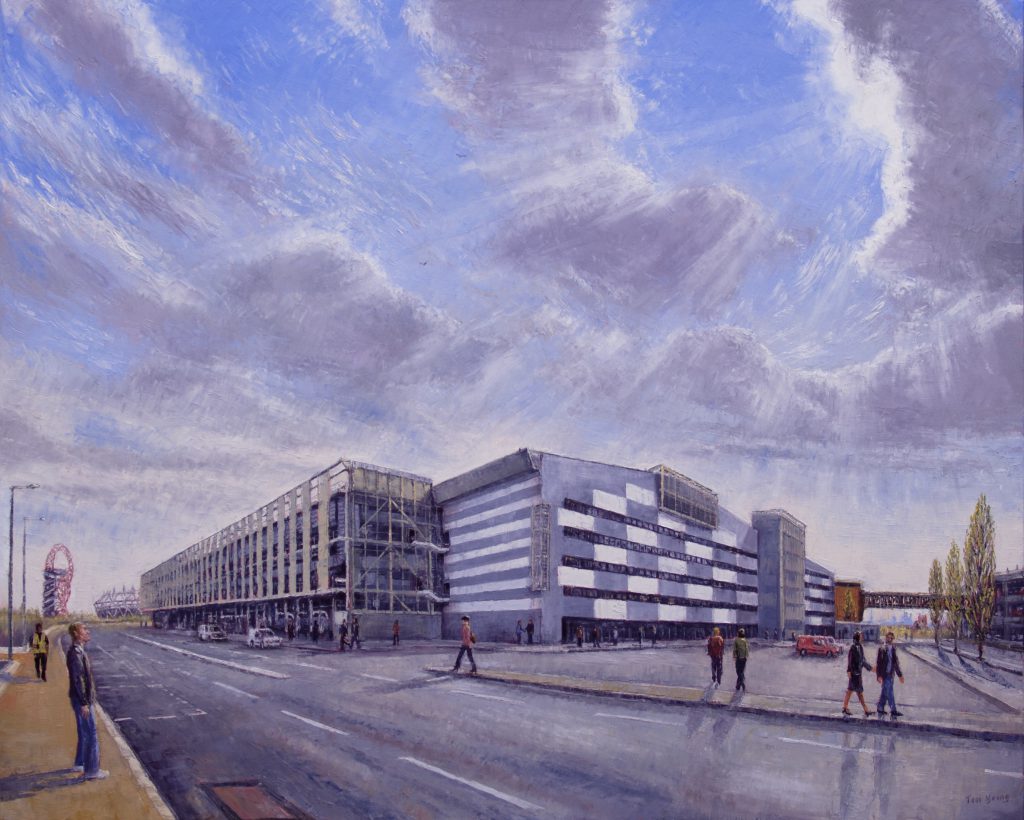 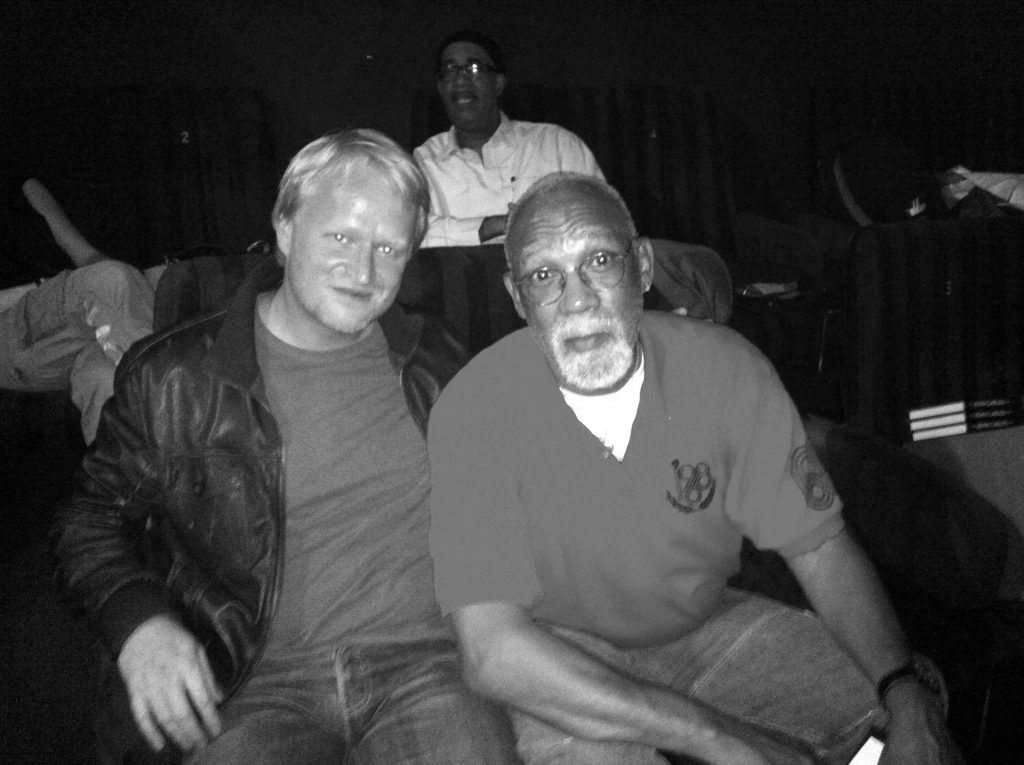 Tom: “This is a picture of me meeting John Carlos at the Gate Cinema in Notting Hill in May 2012. John is the ‘Black Panther’ athlete from the 1968 Olympics.”

“I was impressed by how John Carlos said that his protest with Tommie Smith at the 1968 Mexico Olympics was not necessarily just for black people; it was for the human rights of all people. He said to me something along the lines of how important it is for anyone to use what chances they have to bring some justice and good into the world.

“If you have a moment in the spotlight, and you perceive injustice in the world, then use your moment for the greater good. Be true to yourself. Get out there, follow you heart, face challenges, be prepared to screw up from time to time, and never forget who you are.

“Despite being about as white as you can get, I do feel some connection to his background. I am aware about the struggle of African American people and the civil rights movement from my interest in history and jazz/soul music, and my experience as a trombone player. I also spent time living with the black community in Philadelphia in 1999, when I did an exhibition about soul music at the African American Art Expo. I was the first white person to take part in the annual exhibition.

“Something else John Carlos said that stayed with me is that the Olympics is a corporate exercise for big companies to make money, and the system uses us to pay for it through taxes. Well, I thought, there’s probably a lot of truth in that, but I’ve got a commission from them that will make me some good money. That’s what I need to keep going as an artist, which is difficult enough in today’s economic climate! So I’m thankful for that.

“I can use this money to help fund certain non-commercial projects, such as my new experimental abstracted style, ‘art jams’, and creative projects with disadvantaged children here in England and abroad.

“Otherwise, I’ve been doing commissions and my own meditative oil paintings about the river Thames, which I love to do to get back in touch with my homeland and how it feels to be back. I’m also developing new techniques with my abstracted ‘colourfields’ pictures, which involve mixing watercolours, inks and oils on the same canvas. They are partly based on real places, and partly imagined.

“Following on from the last Polymath article, I certainly have been able to return to England on a new level, and see it from a new perspective.” TF 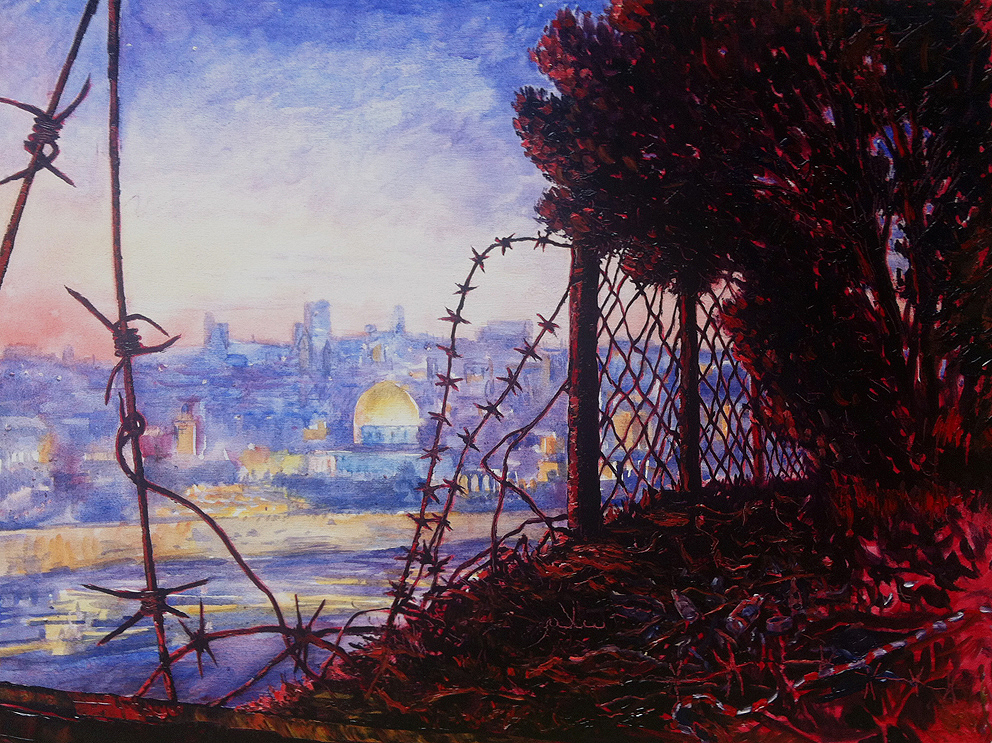 Tom: “Many of my paintings are symbolic and suggest how I perceive situations in the world; dealing with displacement, how religious tribalism so often causes conflict, and how new life and resilience can grow from tragedy.”

More information and images of Tom’s work can be found on his website here: www.tomyoung.com 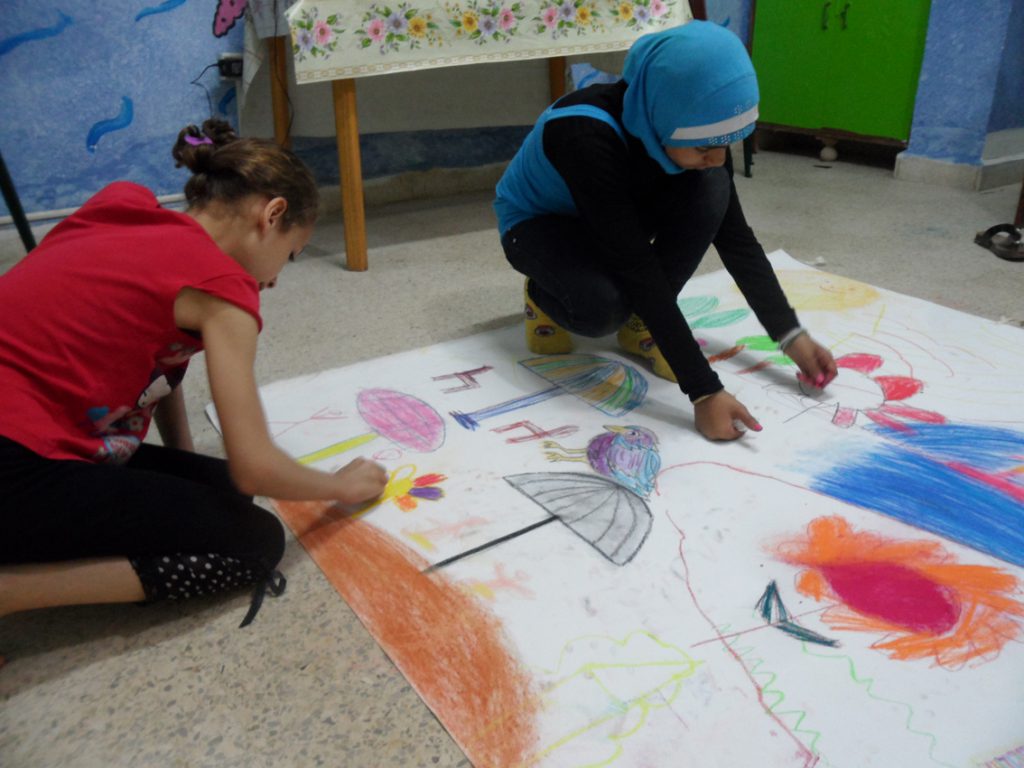 Girls drawing in one of Tom’s art workshops